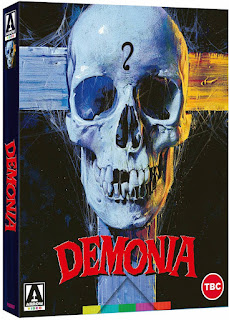 What to say about this new Arrow release of a 1990 film co-written and directed by Lucio Fulci, he of Zombi 2 and The Beyond fame  To be totally honest, I've never 'got' why people admire him so much. The best of his films seem just okay, and the worst ... well ...

Sadly Demonia falls into the latter category. Apparently it was denied any release anywhere until picked up direct for DVD, and watching it you can see why. It opens with a scene of some nuns being inexplicably crucified in an underground vault somewhere - scenes which reoccur later in the film - and this is the most exciting thing about it! Then we cut to the present day, where archaeologists are exploring the area, and you think, maybe they'll find the crypt and unleash zombie nuns who will slaughter everyone ... nope. Instead one of the archaeologists, a girl named Liza (Meg Register), who has a penchant for looking upset and cross, and staring out into thin air a lot, and who previously fainted at a seance and saw a creepy nun, goes exploring and finds the crypt. She seems horrified by her discovery and starts smashing a wall down to get to where the nuns were crucified ... She's an archaeologist, so coffins and bones should excite/intrigue her, not horrify her ... and where's the 'preserving the scene' instinct ... completely missing! 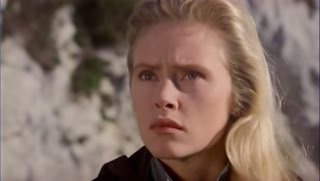 Thereafter random people start to die by harpoon gun, in a meat freezer, torn in two in a trap in the woods, and, most hilariously, clawed to death and eaten by pet cats!  Seems the ghostly demon nuns are out and about and after some sort of revenge! Liza has been possessed or something, and so the archaeologists storm the crypt and set the remains of the crucified nuns on fire, allowing Liza's dead body to appear on the ground ... and the film ends. 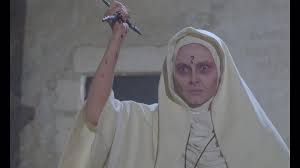 Sadly it's slow and ponderous, and the narrative follows Liza as she mopes about, staring into space (the photo here is typical of her expression through most of the film). It's a relief when the killings start, but you do wonder how ghostly nuns could arrange all these deaths. In particular the one where the chap is ripped apart in the forest: nicely set up, and the gore is not too badly done ... but it's more laughable than scary. You just don't really care about anyone in the film!  It's been described as a 'nunsploitation' film which seems about right. There's an info-dump in the middle where we learn that these nuns had been having sex parties with local boys, killing them as they reached orgasm an drinking their blood!

The Arrow print is, as usual, good, and shows off the cinematography nicely. The underground crypt is a great set, and the locations are scenic. It's a shame that the script is just not up to scratch.

For fans of Fulci though, and admirers of what is described as perhaps his last good film (I dread to think what the subsequent ones are like), this is a smashing restoration and package! 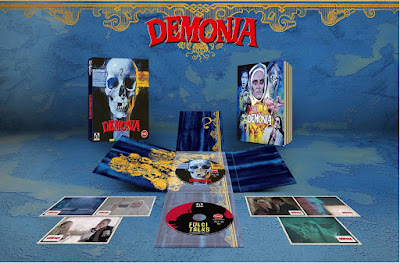