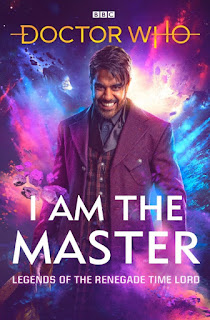 Good old Auntie Beeb and Ebury have been doing a roaring trade in Doctor Who titles over the last few months, and short story collections seem to be the order of the day ...

I Am The Master is an eclectic collection of six stories about arguably the Doctor's greatest enemy - certainly the one he has known the longest ...

What's less clear is which Master is featured in the tales ... some are obvious while others are seemingly interchangeable.

We kick off with Peter Anghelides' 'Anger Management'. The Master is being held prisoner by a biomechanoid called Loge in a device which traps the prisoner for seemingly years from their point of view, while only minutes pass for Loge. 'Slow Captivity' it's called, and I loved the conceit of it. Loge wants the Master to help with the rescue of three alien warlords ... but can he outwit his captor?

I think the Master here is the first incarnation (Delgado) and all the trappings are included: rubber face disguises, tissue compression eliminator ... It's well written and a good kick off for the book.

Next up is Mark Wright's 'The Dead Travel Fast' which pits a decayed and decrepit Master (so either Pratt or Beevers) against the author Bram Stoker, who is visiting Whitby on holiday ...  There are lots of great allusions here to Stoker's novel Dracula and the whole piece is written through diary entries, again akin to the book. I enjoyed it a lot. Some great writing and description here.

Third is Jacqueline Rayner's 'Missy's Magical Mystery Mission'. Oh dear. I just couldn't get into this one and had to give up on it. The prose is simplistic and the story just not interesting. The characterisation of the Master, here in his/her 'Missy' persona (Gomez), is accurate to her television portrayal, but I found that hard to watch as well, being somewhat too eccentric and crazed for my liking. So if you liked Missy on television, then maybe you will get on with this story too.

'A Master of Disguise' is by Mike Tucker, and here we're introduced to a man, Moses, who makes all the Master's various rubber disguises. I'm not sure which Master this is though ... I'm tended towards the Delgado variant though as this seems to fit best with the story, though it could be the Ainley. It's nicely written and the ideas are good, with the Master even impersonating the Doctor at one point!

The next tale is unfortunately another disappointment. 'The Night Harvest' by Beverly Sanford is hard going. I think it's the Simm Master as the dialogue is wordy and the overall plot seems obtuse and hard to follow - the sort of crazed logic which this incarnation of the Master had in the TV show. I think my main issue, though, is that I don't really care about the other characters. Tala is the viewpoint character, and she's somewhat boring. Add to this lots of dialogue and the whole thing drags. Not top of the pile for me I'm afraid.

The final story, 'The Master and Margarita' is the best in the book. Matthew Sweet takes as his background Tsar-ist Russia and this adds a great backdrop to the story of spawning mushrooms and alien infiltrators. The language is intelligent and authentic, and the Master himself - I think this is the most recent Dhawan version - is nicely characterised.

Overall this is a varied collection with a couple of disappointments, but the remaining stories are certainly worth the price of admission. 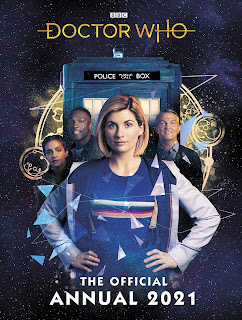 Moving to the latest Doctor Who Annual (for 2021), and this is a curious beast which must have posed enormous challenges for the publishers and the writer.

The Annual of olden days used to be an eclectic collection of original stories and artwork, comic stories and occasional 'factual' pages, all interspersed with quizzes, crosswords and other puzzles. But they were aimed at fans of all ages, so the stories were not 'dumbed down' and the writing was always entertaining, even if the stories were often about somewhat esoteric subjects which wouldn't be seen on the television variant.

Unfortunately Penguin, who now publish the book, decided to move completely away from original fiction, and now present a book each year full of photographs and features pretty much solely from the current or most recent series. Plus it's written for five or six year olds, with text so simple that it's almost painful for an adult to read. Likewise the quizzes and puzzles are hardly taxing ...

For this edition, then, they have decided to present 4 pages on each of the stories from last season, interspersed with 2 pages looking at other elements. There are 'fake' reviews of places the TARDIS has been from Graham, Mary Shelley (strangely with a Twitter handle of GothGirlMary1797) and the Judoon Pol-Kon-Don (the review is just 'Ko Fro Lo Bo' etc). Bits of the book are as though written by the Doctor (and read like some perky over-caffeinated junior school teacher telling her class what she did on her holidays). There's a few pages at the back dedicated to the overarching Time Lord Victorious project which are dull and of course this whole TLV project relies on people seeking out all the variant parts across multiple merchandise lines to get the complete story!

It's tricky to really be able to 'review' the Annual as it's a book which does not stand up to detailed scrutiny. It's purpose is a Christmas-stocking filler gift for kids, and as such it's a light and transient skim through television stories which the children might have seen earlier in the year.

This slightly older (but young at heart) fan, however, wishes there was more to challenge and entertain the younger reader. This year would have been perfect for some original fiction, some great artwork and some more in-depth factual glimpses behind the scenes. But that's unfortunately not where the publishers' or the BBC's head is at with the show. Such a shame.