Review: Doctor Who: The Monster Vault 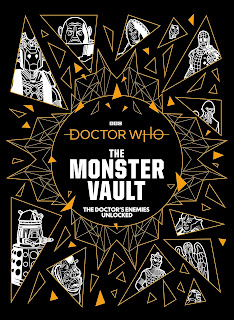 2020's large format, full colour tome from BBC Books is called The Monster Vault ... but forgive me for a moment as it all seems very familiar.

It's a big book - 312 pages - with a £25 price tag ... but haven't we seen it all before? The content is an A-Z of the monsters and aliens that the Doctor has faced in the show. It's not complete in that it doesn't include absolutely everything, and it does not cover the 'reality' or 'behind the scenes' element except for a brief section at the back. For each entry there is the creatures' history as explained (mostly) on screen, with a couple of deviations from the facts we know into what the authors are making up and surmising - but unless you knew, you wouldn't know the difference as it's all presented as 'authoritative'.

For example, the first entry, for the Abzorbaloff, claims that the creature's entire body is in a constant state of suction ... I don't recall that from the TV episode ... Next up is Alpha Centaurians and there's talk of their home planet having an abundance of food and no predators, so the creatures developed politeness. This is pure conjecture ... and so the book goes on, mixing fact from the TV show with a large dollop of conjecture and extrapolation on the part of the authors.

But haven't we seen books about the monsters before? Indeed, there was Lesley Standring's Illustrated A-Z (1985); I myself wrote A Book of Monsters (1997) which focussed on the behind the scenes creation and development of them, again copiously illustrated. Then, for the new series, Justin Richards produced Monsters and Villains (2005), Aliens and Enemies (2006), Creatures and Demons (2007), The Ultimate Monster Guide (2009, updated 2010), Monster Miscellany (2011) and The Secret Lives of Monsters (2013). There was also 100 Scariest Monsters (2011). So a fair few books focussing on the monsters, using only the fictional material presented on television, and illustrated with lots of photographs.

The Monster Vault seems to be the latest in a never-ending stream of similar books from BBC Books. Indeed, it is illustrated with photographs, but each creature gets a rather nice full page 'visualisation' courtesy of Lee Johnson which often looks like a photograph or perhaps a collage of pictures - it's hard to tell what is a photograph and what is artwork.

I think if I'd not been aware of the plethora of similar titles over the years, this book would be quite impressive. It's beautifully produced and laid out, and has monsters galore to sate any appetite. It's also obviously aimed at the younger set, with nothing over and above the descriptions and potential background and pictures. There are some 'unanswered questions' dotted throughout. Like for example why the Chameleons kill people when they're 'high-minded'  - they do so using a slow moving laser, unsupervised. Which is a bit daft, a bit of a joke, and totally invented (though the sequence with the laser is decidedly strange in the story) - the text is included solely to 'explain' a rather weak plot point in the story in which they appear. This continues with somewhat strange 'explanations' of why a Draconian state room is coloured green, how Haemovores can shape metal with their hands, and why the Rutans lost interest in Earth as a planet of strategic importance.

The book covers the entirety of Doctor Who with entries for Sensorites and Monoids alongside Chameleons (2nd Doctor), Solonian Mutants (3rd), Ogri (4th), Tractators (5th), Vervoids (6th), Cheetah People (7th), Jagrafess (9th), Weeping Angels (10th), The Flesh (11th), the Teller (12th) and Zellin & Rakaya and Thijarans (13th) and many more besides. And of course the Daleks and Cybermen are here too.

Just as we think it's all over there's a very welcome final chapter looking at the behind the scenes elements. This again includes photos from all eras of monsters being created, worn, fitted ... there are design sketches and shots of them being built ... it's probably for me the best and most interesting ten pages in the book!

Overall this is a smashing book, well produced and laid out, which will provide hours of interest for fans new to the show in discovering more about all the various creatures that the Doctor has battled over the years.