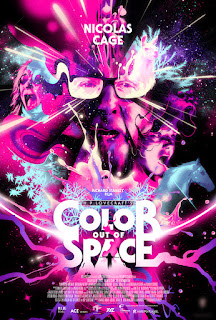 I've long been a bit of a fan of H P Lovecraft - it's the ideas, the slow burn and of course the tentacle monsters that do it ... and while there have been some film adaptations of his work in the past (think of titles like Re-Animator, The Haunted Palace, Dagon and From Beyond) none of them have quite managed to capture the creeping horrors described in Lovecraft's fiction.

Color Out Of Space however manages to do just that, and it does it very well indeed. We are introduced to a dysfunctional family. Father Nathan Gardner (Nicolas Cage) lives in the backwoods somewhere in America, miles from civilization or anywhere else for that matter. His wife Theresa (Joley Richardson) tries to cope with their son Benny (Brendan Meyer) and their rebellious daughter Lavinia (Madeleine Arthur) as they grow up, not to mention the youngest son Jack (Julian Hilliard). Into their lives comes Ward Phillips (Elliot Knight), a hydrologist making a survey of the water in the area. He's attracted to Lavinia ...

Then, one night, a meteor crashes onto their land, leaving a crater and a red hot ball of something ... alien. Everyone is mystified, but soon strange red flowers start appearing, the grass turns red, and Jack sees a strange insect hatch from a jelly-like object down the well.

From this point onwards, life for the Gardners changes. Their herd of alpacas gets frisky, Theresa cuts her fingers off while chopping carrots, and the dog runs off, to be found later on ... changed ...

But things can get worse ...

What I liked about Color Out of Space is the way it starts slowly, drawing you into this family, and then when the meteor arrives, you just know that it's not going to be good. The 'color' of the title seems to be a bright luminous pink/purple, and the idea here is that the meteor contains a creature of some sort which is this colour ... a sentient colour. But more that that, it's a sentient colour which likes to assimilate the humans ... so we have some tremendous Blob-like scenes of melting flesh and physical change, and also moments which are straight out of John Carpenter's The Thing of mutated dogs and a crazy mixed-up alpaca creature ... not to mention what happens to the people! 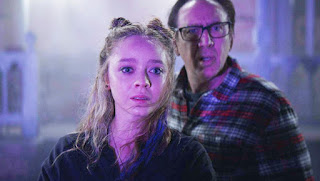 It's a bleak film in some respects as there seems no respite and no way for a backwoods farmer to even fight this alien menace ... but the film finds an ending, even if it's slightly underplayed and underexplained.

The film is a very enjoyable and entertaining watch, and Richard Stanley has worked wonders with the source material to deliver something which, even if not 100% faithful, feels like Lovecraft.  I particularly liked his use of practical effects throughout, augmented on occasion with some CGI (or perhaps animation). There was only one short shot which I would have preferred to be practical when it didn't appear to be so ... but I'm not telling you which it was as I'm trying to avoid spoilers here! 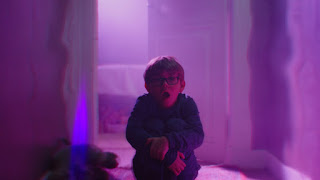 Well worth seeking out, and it provides something new and interesting for jaded horror fans to appreciate ... cosmic horror which is truly cosmic and horrifying!