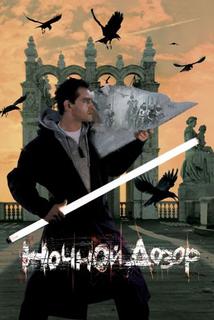 Went to the cinema tonight hoping to see Land of the Dead ... unfortunately that film was showing on different nights now, so we saw a film called Night Watch instead. I had no idea what this film was about, but I really was pleasantly surprised. It's in Russian with English subtitles, but please don't let that put you off as this is a rather classy horror flick with some superb ideas and visual effects, and it rolls along at a cracking pace. The plot is along the lines of there being two opposing forces: the Day Watch and the Night Watch, each of which keeps the other in check. But a new 'special' human, called an Other, has appeared and when he chooses whether to follow the forces of light (good) or dark (evil) then the balance will be tipped. The plot follows one 'Other' who finds himself seeking this new human to try and bring him to the light, but along the way there's a battle with vampires (some very neat stuff here with them only appearing in mirrors) and other witches and demons, and a nightmarish journey into something called the Gloom which seems to eat up those who venture into it if they are not careful. There are also beast-men and tiger-women, and an incredible sequence where an owl transforms into a woman ... there's a lot going on in this film! The sound design is brilliant, as is the subtitling which has been done in such a way that it actually integrates with the film itself, the words appearing at different speeds and in colours to match the tone at the time - some scenes are almost graphic novel-like in their combining of visuals and on-screen words. Very nicely done indeed. Other great moments are the spider-toy thing near the start, the incredibly edited sequence of the witch forcing a miscarriage on a girl, the sequence where a truck flips over a man in the road and lands and carries on driving the other side ... and many more besides. Overall the film comes over as a sort of hybrid between The Matrix and Underworld with much originality and cleverness added into the mix. I really enjoyed the experience and will probably get the film on DVD as and when so I can see and appreciate it again.
Posted by David at 11:05 pm