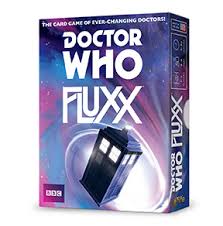 Not being a gamer, I'd never heard of the game Fluxx, which seems incredibly popular and which has expanded to cover all sorts of licensed properties ...  Well that was sorted out when the company behind it, the well named Looney Labs, kindly sent me a review copy of the new Doctor Who version of the game ... and we had a pre-Christmas go at it!

First of all, the game itself.  It's a simple set of 100 cards ... there are different sorts of cards contained in the pack:

NEW RULE - which change the rules of the game as you play
ACTIONS - things that you have to do when you play the card
CREEPERS - a bit hard to explain, but these stop you winning
KEEPERS - these are character cards, and to win you have to have in front of you (ie have to have played) the cards which are stated on the ...
GOAL - the circumstances by which you win

The game involves players taking turns to play the cards in their hands, according to the rules currently in force, to try and reach the goal which is currently in force... and the Rules and Goal change as players change them, add to them, remove them ... and generally do what the cards tell them to. 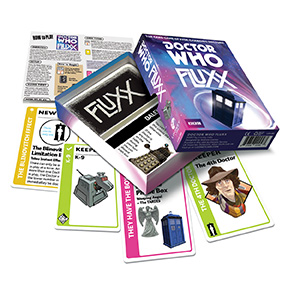 The shorthand version is that you start with the initial Rule: Take One Card. Play One Card ... and you go on from there by simply following what is said on the cards as they are played.

So we set up a game with myself, my wife Sam, and my sons James and Andrew ...  While it starts simply enough, after a few rounds, the Rules changed to Take Three Cards. Play Four Cards ... so you run out quickly ... then Actions came into play like: Discard all  your hand and Draw them again ... or Swap your hand with another player of your choice ... and so on ...

It got confusing very quickly, but the basic litany of 'read what it says on the cards' was what was needed to make it all work! 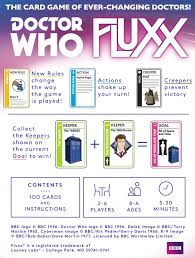 It soon gets hideously fun as you need to work out what Keepers you need to have, against a possible Goal card you have ... so that on your turn, you can play them in the right order to win!! You can't rely on the Goal card on the table as it might change!

BUT be warned there are Reverse The Last Turn Action cards which will stop you ... So it's really not that easy. 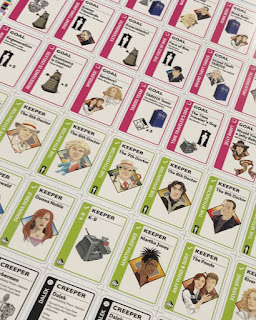 What I liked was the simple gameplay - once you get the hang of reading cards, then it's fairly straightforward - and it doesn't take hours and hours for a game ... maybe 15-20 minutes ... Obviously the more people are playing, the longer it might take ... but also the harder it gets to follow what is happening as some Action cards can reverse the order of play, allow players to interrupt and take over play ... and generally to mess everything about ...

At £14.99 for the little pack of cards, it seems quite expensive as there are no other elements - no board and no playing pieces or dice. Maybe this is the going rate for card games these days ...

One word on the cards themselves, and I really liked that they all have little drawings of the characters on them rather than standard BBC Photographs. This makes them stand out from the rest and become something unique. The images are by an artist called Derek Ring, and include all 12 Doctors and most of the Companions from the new series. 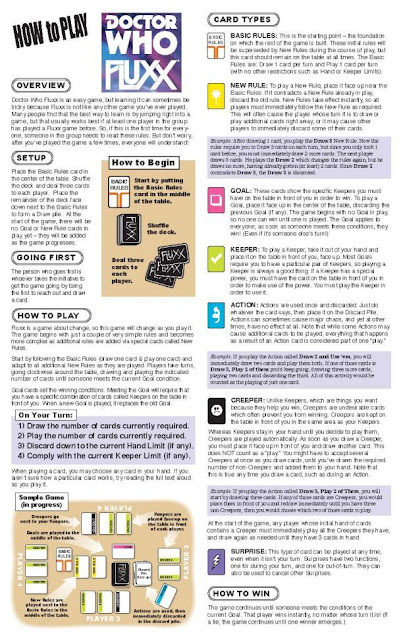 Email ThisBlogThis!Share to TwitterShare to FacebookShare to Pinterest
Labels: Doctor Who Toys, review