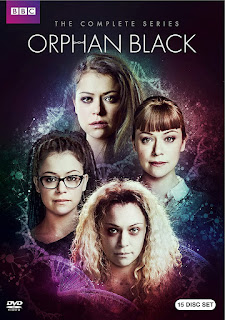 Every so often a series comes along which is so compelling, that it just drags you with it. We first caught Orphan Black on telly - I forget which channel. It might have even been on Netflix, though I don't think it was. We watched to the end and were enthralled throughout. So much so that for Christmas last year I got a well-priced Box Set of the series, and we have just finished watching it all again!

So what is Orphan Black? It's a thriller series, but one which takes as it's basis and background the ideas of clones and DNA and genetic manipulation and longevity. So there's Big Science involved, and mysterious organisations (the Dyad Institute and Neolution) and powerful men controlling these structures.

Into this world falls Sarah Manning. In the opening episode, Sarah is standing on a train platform waiting for her train. She's a bit of a rebel, a bit of an outlier of society. Down from her on the platform is another girl. She seems agitated, and when she turns to look at Sarah, she has the same features - she is Sarah's double. She places her bag on the platform and abruptly steps off in front of a train and is killed! 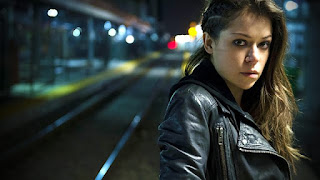 Sarah is shocked, but, ever the opportunist, she steals the girl's bag as she leaves. She discovers that the girl was Beth Childs, a policewoman ... and from this point Sarah's life is turned upside down. She learns that Beth was a clone, and that there are other clones too: blonde Helena is a twisted and insane version of herself; Alison Hendrix is a soccer mom living in a perfect home with a perfect husband, Donnie (Kristian Bruun), and two adopted kids; Cosima Niehaus is a science nerd, studying hard genetics and DNA to try and find a cure for the respiratory disease which threatens to kill her ...

All these characters clash together, along with Sarah's brother Felix (Jordan Gavaris) (they were both adopted by the same mother, called Mrs S (Maria Doyle Kennedy)) and discover that they are all part of a global conspiracy to control birth and genetics and sell it to the highest bidder.

So that's the basic set-up, and each season follows and develops the ideas and concepts and keeps opening the show up.

In season One Sarah assumes Beth's identity to try and find out more about her and discovers a hidden world of clones and corporate espionage. Someone is also killing the clones, one by one, and the race is on to find out who ... Sarah's daughter, Kira (Skyler Wexler), is also the focus of intense interest of Aldous Leekie (Matt Frewer) who runs Dyad as Sarah (and Helena) are the only clones who are fertile.

In Season Two we are introduced to clone Rachel Duncan, who is high up in Dyad, and Delphine (Evelyne Brochu), a Dyad scientist who works with, and falls in love with Cosima as they try to find a cure for her illness. Meanwhile Sarah is trying to stay alive while Alison is trying to lead a 'normal' life in the suburbs but ends up killing one of her 'perfect mom' rivals. 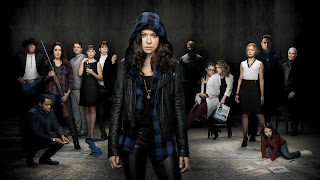 Season Three brings in the idea that as well as Sarah and her clones (termed Leda) there are also Male soldier clones (called Castor) (Ari Millen) and Sarah must discover what and why they exist. We meet another Leda clone, Krystal Goderich, and Cosima meets and falls for Shay (Ksenia Solo) who may or may not be another spy ...

Season Four fills in backstory with Beth investigating what is going on, and the discovery of Neolution's plan to implant tech worms in humans to harvest and control their DNA. Meanwhile Helena is being held captive, and the Neolution cult, headed by the aged P T Westmoreland (Stephen McHattie), has a base on an island where Cosima is being forced to conduct experiments ...

Season Five brings it all to a close, with Dyad and Neolution being attacked by the Clones ... but will there be a happy ending? Will Sarah and her sistres survive, and how will the world look in the aftermath. 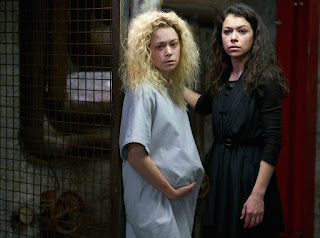 I have deliberately tried to avoid spoilers in this brief rundown, and really the show is far more involved and engaging than it's possible to explain in a review. Furthermore, sharp eyes will have spotted that I have mentioned no actresses for Sarah and the clones. This is because they are all played by the same actress, Tatiana Maslany, who is simply a revelation and utterly the best thing about the show. Every one of her characters is different, from the way they dress, through their speech and even the way they move and react. You always know exactly which you are watching, and even when one clone has to pretend to be another (which happens a fair amount), Maslany manages to imbue her performance with aspects of both. It's a brilliant performance! And her depiction of the feral and unpredictable Helena is simply a joy.

Furthermore, the direction and technical skill on display is immense as we often see several Clones together in the same shots, same scenes. The effect is flawless and you totally believe that these characters are separate and different and, indeed, are all together partying or talking or whatever. It's actually hard to believe that they are all the same actress, it's that good! There's little wonder she won the Primetime Emmy Award (2016), a TCA Award (2013), two Critics' Choice Awards (2013 and 2014), and five Canadian Screen Awards (2014–18).

Another pitch perfect element of the show is the title sequence and accompanying music. The music especially is so hauntingly memorable and builds beautifully over its short span, but this is enhanced by the visuals which encapsulate perfectly the themes of the show. There's DNA strands and separation of an egg, two 'Sarahs' split away from each other ... it's a magnificent piece of work in its own right. It is no surprise that Technicolor's Design team won an Applied Arts Award for the opening title design.

If you gather that I am a fan of the show, then you'd be right. Supporting Maslany in her multiple personas is a company of simply superb actors. Kudos to Jordan Gavaris as Felix, who manages to be the rock that Sarah clings to, while all the time being big brother to Alison and Cosima, while navigating his own sexuality through painting in the nude! He is a superb character, and very well played. Then there's Maria Doyle Kennedy as Mrs S, a towering performance of a mother who will do anything to protect her kids, even when she's more involved than she would like to admit. Kevin Hanchard plays Art Bell, Beth's partner in the police. He has a struggle to accept what's happening, but turns out to be a powerful ally. Even minor parts are cast and performed well, making the whole show one of the most watchable and enjoyable that I have ever seen.

If you get a chance to watch it, then do so. If you like spy thrillers, conspiracy shows, and action/adventure then I don't think you'll be disappointed.


For further reading there's a great piece on the show here: But Beware Spoilers!
https://slate.com/technology/2017/08/orphan-black-was-never-about-cloning.html
I just found too this SDCC panel where the cast are challenged to perform against different clones with Maslany playing all of them!
Posted by David at 1:00 pm