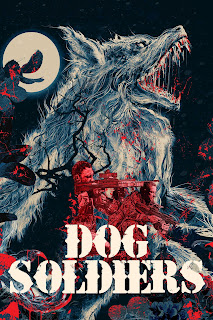 Dog Soldiers first came out in 2002, and for 2020, there is a new cinema release coming out, all restored and looking amazing.

For those who have not seen it, it's something of a treat, being director Neil Marshall's first cinematic outing. The film, scripted, directed and edited by Marshall, follows a group of soldiers under the command of Wells (Sean Pertwee) as they take part in a training exercise in the Scottish Highlands. They find the commander of the group they are training against, Ryan (Liam Cunningham) wounded and his troop slaughtered by creatures unknown. They are rescued from the wilds by Megan (Emma Cleasby) who happens to be passing in her jeep, and she takes them to the only house in any range to try and get help. But it's deserted, the occupants missing. So the soldiers take up residence and patch up Wells who has had his guts ripped open by the attacking creatures.

Soon the house is under siege by a pack of ravening werewolves, and worse, the danger is also coming from within as Ryan also turns into one of their number. 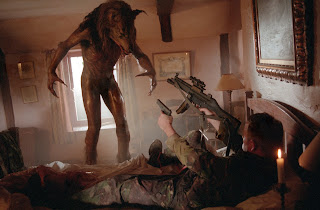 The film is something of a masterclass in ratching up tension and excitement as it moves from what at first appears to be a 'soldiers on patrol' piece to a superior werewolf movie. Marshall keeps the action going, and a favourite sequence is when Wells and Cooper (Kevin McKidd) have to escape the werewolves by basically breaking through the walls and floors of the cottage to get away!

One minor disappointment is that there is no actual full transformation sequence, so if you're expecting effects on par with The Howling or An American Werewolf in London, then this is not the place to come. There are some contacts and fangs-type initial transformations though. The film is low budget but Marshall gets every penny on the screen, and it also benefits from some standout performances from Pertwee and McKidd.

The ending might be seen as a little predictable, but it all adds to the charm, and overall the film is a superb slice of horror of the sort we thought filmmakers had forgotten how to do! 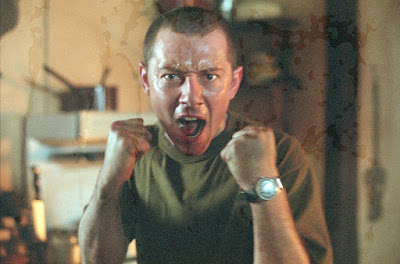