Review: He Came From the Swamp: The William Grefe Collection (2020) 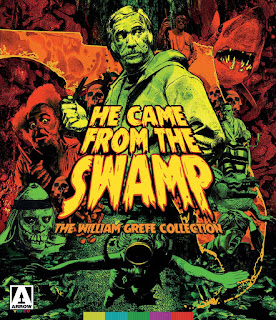 I'm possibly not alone in never actually having heard of William Grefe, which is a little odd as I am something of an aficionado of the sort of ultra-low budget films he made ... but looking at the titles in this new collection and retrospective of his work from Arrow, I suspect that these are a little lower than even I usually go.

To even start to understand these films, you need to understand also that there was a subculture in the sixties of films which involved 'beach parties'. In fact, beach parties seem to have been really popular for a time as there are quite a few films which feature them. Basically a group of pretty young men and woman all strip down to their bikinis and swim trunks and dance on a beach to music, throwing their arms and bodies around in jerky movements, a little like a spider with St Vitus' Dance. The films feature a lot of this ... so be warned. 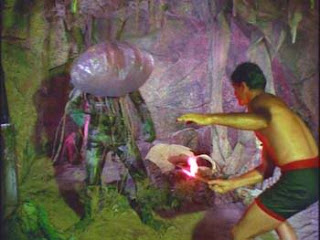 The plot, if it can be called that, of Sting of Death is that people are being killed by poison which seems to be coming from a Portuguese Man of War jellyfish ... but it's deadly! Cue a deformed handyman at a hip pad owned by some scientist-types. He seems to be turning himself into a jellyfish man (mainly by putting an inflated plastic bag on his head) and killing the hip cats who have descended on the house for numerous beach parties. They are dancing on the boat as it arrives, then they dance on the jetty, then they dance around the pool ... and somehow our jellyfish man gets into the pool unseen, and kills a girl before getting out again, unseen.

Grefe wisely keeps his monster to shots of flippered feet and wet-suited legs for the most part, only revealing the whole horror of the jellyfish man towards the end ...

It's a turgid affair, not even enlivened by the many shots of gyrating bodies and girls bottoms. 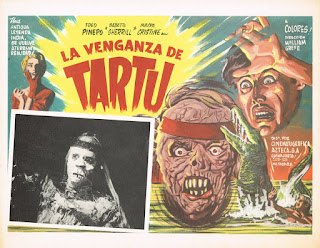 The next film is Death Curse of Tartu (1966), and this touches on the obsession with cannibals and curses which seemed to be around at the time. Unfortunately it has even less of a plot than Sting of Death and seems to revolve around people running around in the Everglades, being chased by crocodiles, finding caves with sarcophagi in, and a living mummy which inexplicably changes into a native American of some sort before it ends.

It's obvious that Grefe had access to one of those swamp-boat things with a big propeller on the back as it's used here as well in the next film, The Hooked Generation (1968). The attention span of watching these things is growing less with each entry. The Hooked Generation looks at drugs: usage and trafficking. We have a group of unsavoury characters who are trying to smuggle drugs, but one of their number is already high and the rest are pretty hopeless too. They evade the Everglades police, killing them in a shootout, and hideout somewhere, taking captive a young couple who saw them. 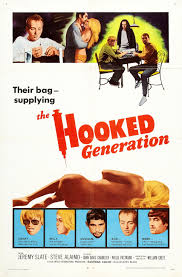 It's slow and talkie, but does show a slight narrative step up from Death Curse. Again, this is selling into the obsessions of the time, with a girl in a bikini in trouble, bad drug traffickers, and drug taking.

The next film is even worse! The Psychedelic Priest (which is actually called Electric Shades of Grey on the print) had, as explained in a documentary/interview on the disk, no script, and this is painfully obvious in the film which basically follows a priest who is given some acid, and who then trips and wanders through various music festivals which feature the worst music imaginable. He picks up a female hitch-hiker and she falls for him, but he decides to return to the Church. It's a slow, motiveless and boring slice of cinema, and all I can assume is that it went down well with drive-ins where the viewers were similarly indulging either in drugs or in each other - either way paying no attention to the film at all.

I note that it was made in 1971 but not released at the time. It's release came in 2001 on a direct-to-video label ... perhaps it should have remained unreleased and forgotten. 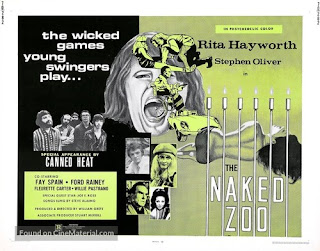 The Naked Zoo (1971) has a little more going for it. For a start it stars Rita Hayworth in the twilight of her career! The plot has had more work done on it this time, and the film follows a writer who seems to have no trouble getting the girls, but he seems to have a preference for the older lady and is having an affair with Hayworth. Her wheelchair-bound husband is killed in an engineered accident, and then the writer kills her too with a combination of drugs and shock treatment!  But who exactly is the young girl he is also dating ...?  The drug use/party culture is still strong here, but it's more focused and better made than the previous films, and the acting is likewise notched up a rung or two. 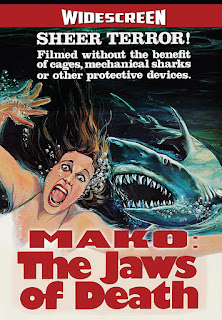 Mako: Jaws of Death (1976) is a creature feature, but here the sharks are the 'good' guys! The film is set against a backdrop of shark-hunters and exploitation, and follows a chap who has befriended the sharks and has a tooth necklace given to him by some 'shark god' ... he decides to do away with all those who threaten the sharks, which strangely includes an underwater performer at a local bar. The plot again is better here, and the underwater footage is pretty decent. This was apparently the first 'homage' to Jaws which hit cinema screens and in some ways is testament to the success of the Spielberg film.

The final film in the Collection is Whiskey Mountain (1977). This follows two men and their wives who decide to head off to somewhere called Whiskey Mountain. The film seems to be mostly a travelogue showing them riding their bikes and crossing rivers and so on, but eventually it settles down to them finding a shack and being captured by a group of drug smugglers. The men are tied up in a cave while the women are raped. The men escape and try to go after the druggies, but the local sheriff won't believe them ... and the film ends with one of the men and the two women lined up in the sights of the sheriff's gun as he hovers above them in a helicopter. 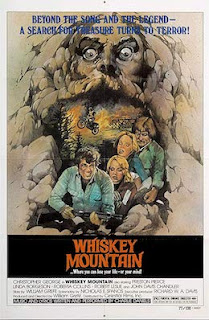 It's a strange beast, and unfortunately a pretty poor quality print as well, and it looks like it was made in the sixties rather than the seventies.

What is very interesting about this set, and now I've watched all the films, is that, strangely, it's the first, Sting of Death which now seems to have the most appeal. Yes the monster is dreadful, and yes, it's corny and fairly loose in its presentation, but at least it has a plot and is vaguely enjoyable in the sense that you can marvel and smile at the wetsuit-clad jellyfish man ...

I enjoyed the extras which pepper the disks. The Curious Case of Dr. Traboh: Spook Show Extraordinaire  is a fascinating look at a very under-appreciated area of horror entertainment, the various live ghost and horror shows put on by theatres back in the 40s and 50s.

The documentary about Grefe is also interesting and illuminating, showing the lack of budget and issues which beset some of these low budget films, and how passing trends - go-go girls, bikers, sharks, cannibals - can be turned into films seemingly at the drop of a hat!

I also liked the little piece on Crown Distributors on the final disk - which is not mentioned in Arrow's PR.

As usual, Arrow have pushed the proverbial boat out with the visuals, packaging and production of this set, and it all looks stunning. I just hope that buyers coming to these films fresh aren't too disappointed by the no-budget thrills and spills that they contain.

DETAILS OF THE ARROW RELEASE: