Review: Doctor Who Book: Time Lord Victorious: The Knight, the Fool and the Dead 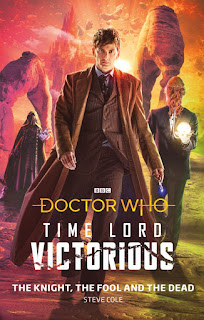 It's been a bit of time since I've been sent some WHO stuff for review, but the last couple of weeks have seen some new items come in.

First up is the novel The Knight, The Fool and the Dead by Steve Cole. This is part of the whole Time Lord Victorious program which James Goss has overseen for the brand, and this is a novel published by Ebury. Well, I say a novel - it's more like a novella, or perhaps a long short story. It has 178 pages, is a small hardback with large text which is widely spaced out.

Indeed, it took me around an hour to read it - and the story is fast moving. There's a planet, Andalia, where some death-dealing creatures called Kotturuh invade and kill everyone. The tenth Doctor gets involved and with the help of an Ood called Brian (who seems to be placed out of time) saves a girl called Estinee who is using something called a Life Shroud ... and they chase off after the Kotturuh, eventually confronting them. There are apparently a lot of references in the book to other elements of the overall 'Victorious' plot and the show, but many of these unfortunately just passed me by. I did like a couple of flashback 'interludes' featuring the first and ninth Doctors, but it's unclear to some extent what they have to do with the rest of the narrative.

It isn't really Doctor Who as I remember watching it, though the tenth Doctor is nicely characterised, as it's all so simplified in terms of the writing level and the plot and ideas. I guess someone a lot younger than me would enjoy it, but I prefer a little more complexity. I would assume/guess there's around 30-33,000 words here which doesn't really give it space for the story to breathe.

The inclusion of a new mega-threat in the Kotturuh is okay, but Brian the Ood just seems silly, especially as he's inexplicably wearing a dinner suit ...  but then he seems to have been included for comic relief!

As this is all part of the bigger Time Lord Victorious project, perhaps it will all make more sense when we see how it all develops and unfolds, but given how hard Doctor Who merchandise is to find these days and how expensive it all is, I wonder if the young people that this seems obviously aimed at would have the patience or money to be able to get all the pieces of the puzzle ... there's a chart available with Doctor Who Magazine which explains all the elements and the timeline for their release and it includes LP records (who under the age of 30 has a record player these days) and even immersive theatre, CDs, action figures and display statues!

I hope it works. I hope it helps to revitalise the Doctor Who merchandise market as it seems fairly stagnant at the moment despite individuals and companies doing their best to produce what they hope might be popular.

I just wonder if this was the best way to start ...