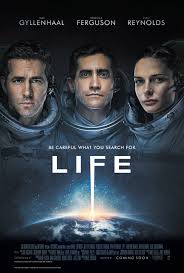 Life is described as Gravity meets Alien, and that's not actually a bad way of putting it. Astronauts on the International Space Station manage to 'germinate' a form of life found in some sand from Mars, and this thing grows into a sort of tentacled creature with wings which can survive in deep space, does not need gravity, and which sort of feeds on blood ...

So the astronauts find themselves locked in a battle with the creature as they realise that it must not reach Earth, but also that they must try and save themselves! As you might expect, things don't go all that well ...

It's a well made film, and the small cast make the most of their circumstances. The creature, dubbed Calvin by the crew, is suitably nasty looking and alien ... I felt it was almost cat-like in it's intelligence and persistence, and it's tenacious and horrific too - certainly more than a match for the astronauts who try everything they can think of to neutralise the alien. 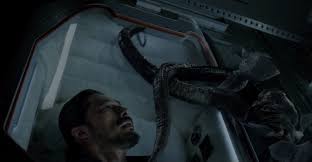 Overall it's an enjoyable sci-fi horror, with a creature that benefits from being CGI rather than rubber.