Review: Doctor Who: The Book of Whoniversal Records 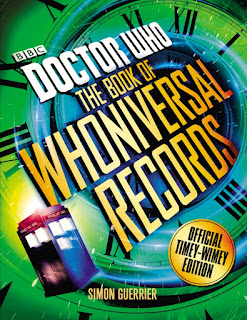 This is more like it ... When I first heard about this book, my brain went into meltdown ... I couldn't quite understand why ... it seemed to be just another way to rehash a factual book about Doctor Who ... and indeed it is, but author Simon Guerrier has taken the challenge and made it into something fascinating and very dip-into-able ...

The Book of Whoniversal Records of course takes its inspiration from the Guinness Book of Records which records feats and achievements in the real world. Thus for this Who version, we do the same for the fictional Doctor Who world, but with half a foot in the real world. Thus we can talk about 'the most expensive special effect' and 'the first real person to appear in Doctor Who played by an actor' ... along with 'the largest army ever' and 'the greatest possible threat to Gallifrey'.  In fact what is most impressive is the sheer number of facts, figures and references which Guerrier crams into the book ...  It's something that I would have loved to have attempted! There are a million obscure references, one-liners, comments and happenings to weigh up in order to decide which are the biggest, smallest, most fearsome, most expensive and so on ... Great fun!

All of these 'records' are copiously illustrated with photographs and colour, and the whole book has a gloss and sheen which is indeed very reminiscent of the Guinness tomes. Some of the records would make superb quiz questions: like 'Who was the first real person to be named in the series and then appear in it' ... much head scratching later, and you would probably never guess that the answer is Sir Patrick Moore! (named in 'Aliens of London' and appeared in 'The Eleventh Hour')

But what about 'the quickest a story kills someone on-screen?' The answer here seems to be 'Death to the Daleks' when a man (played by stuntman Terry Walsh) is killed 28 seconds into the story ... but then there's 'the first person to die in Doctor Who' ... and 'the first person killed by the Doctor' ...

I found this book fascinating from start to finish. Endlessly entertaining and turning up all manner of facts which you just never think about normally! Good to see Frazer Hines' Jamie still there as the companion in the most episodes - 116 in total - which is also more than any other actor in the show barring those who played the first four Doctors!  Quite an achievement.

This is certainly a book to add to the shelves!