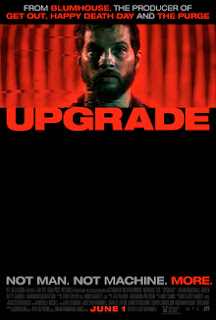 I caught Upgrade recently on Netflix (I think) and came away quite impressed. It's a well done film which covers some old ground, but managed to be just about original enough to get away with it.

The film follows Grey Trace (Logan Marshall-Green), and as the film opens, he's travelling in a self-drive car with his wife Asha (Melanie Vallejo). The car develops a fault and crashes, but then a group of men descend on them, kill Asha and injure Trace so he's paralysed from the neck down.

We then follow Trace as he tries to rebuild his life ... His client, Eron, has developed a computer chip called STEM which will give Trace back his movement, and so he has this implanted, but it soon becomes apparent that STEM has a life of it's own, and it speaks to Trace in his mind, encouraging him to take revenge on the men who did this to him.

The film then plays out a fairly standard 'revenge' plot, but it's the conclusions where it shines, with twists and turns you don't expect, and an ending which is as bleak as they come ... but you'll have to watch it to find out!

The use of near-future tech is great, and Marshall-Green does a tremendous job of acting as immoble, and also when his body is controlled by STEM and moving without his own control ...

It reminded me somewhat of the basics of Robocop but it goes off in its own directions, which is no bad thing!