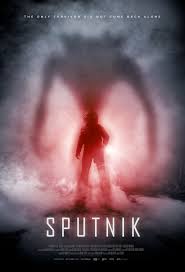 It's always good when something new crosses your path which is actually well made, intelligent, and gripping, and Sputnik is all three!
It's a Russian film (so it has subtitles) and it tells the story of a couple of cosmonauts who hit problems when returning from a mission. When their capsule crashes back on Earth, one of the astronauts is dead, and the other (Pyotr Fyodorov), while wounded, is okay. He's taken to secure premises for checks and observations and the scientists and doctors discover that he is not alone - there is some alien being inside his stomach, curled up and living there. 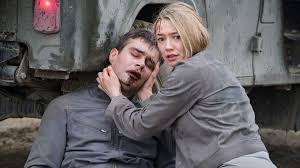 They realise that it emerges at night and so start tests to see what this thing is and what it wants. It seems to convey strength and healing to its host and so is some sort of parasite creature. It's also violent and vicious and attacks without warning.
The set up to the film may be a more benevolent take on Alien, but the ideas behind this film are sound, and the effects are excellent. The alien creature is achieved with CGI (I think) but it looks and moves like a real thing ... really creepy and well done.

I enjoyed the film a lot. The acting is good and the various subplots also work well - all linking in with the themes of love and loss and adoption which the various human characters are working through. All in all it's one of the better films I've seen of late and is well worth a watch.
Posted by David at 11:19 am