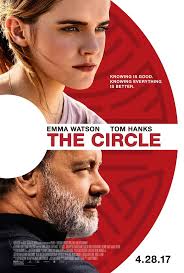 The Circle is a film for our time. Very like the incredible Black Mirror series in it's treatment of modern technologies taken to their logical conclusions, it plays out a scenario where a Facebook-like internet site has taken everyone by storm ... but the people behind it aren't perhaps as squeaky clean as they might like to be seen as.

The site is 'The Circle' and you have friends on there and communicate and engage with them. Mae Holland (Emma Watson) is recruited to work at The Circle's HQ by her pal Annie (Karen Gillan) and quickly finds that just working a 9 to 5 isn;t enough. She is also expected to participate in Circle evening and weekend activities - all voluntary of course - and to post everything to the Social Media ... Eventually she starts to become more popular than Annie and is invited into the 'inner circle' where CEO Eamon Bailey (Tom Hanks) rules the roost.

Mae comes up with more ideas for them, and eventually decides to 'go transparant' in that every aspect of her life is transmitted live to everyone around the world: that's everything including her bank accounts, private emails, letters ... everything.  She is soon the internet golden girl and a sensation ... But there's something lurking in the underbelly of the company ... and perhaps Mae is the one to uncover it ... 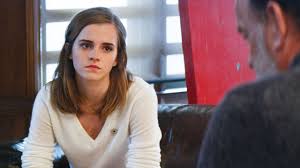 Overall this is a very enjoyable film, which draws you in.  The familiarity of the whole Facebook/Circle set up is part of it, as we can see exactly what the film depicts happening today, and can postulate, along with Mae, where this might lead.  There's also the idea of hidden corruption at the top here, again something which the people of Earth are becoming increasingly aware of: actions taken for the good of the few, not the many.

The acting is excellent, though Emma Watson's Mae seems at time a little too trained and self confident with it all. Hanks is also tremendous as the CEO, and Gillan seems to just play the same character as she did on Doctor Who ... perhaps this was a 'no acting required' role for her though.

Well worth a watch on Netflix as it's a very thought provoking scenario which really stays with you.