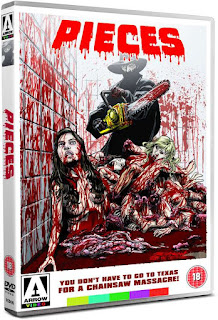 Pieces is a crazy little Spanish horror film, dubbed into English, and containing so much randomness that trying to make sense of it is hopeless. It is, however, charming in its insanity, and if you like eighties slasher fare, then this is certainly one to add to the list!

The director went on to make Slugs, which is a far superior film, but in Pieces he cuts his teeth on the horror film, and manages to come up with something that is original whilst also being very derivative.

We open with a kid called Timmy doing a jigsaw ... except it’s a jigsaw of a nudie lady. Timmy’s mother arrives and is cross, taking the jigsaw from him and soundly telling him off. So Timmy does what any normal kid would: he gets an axe and chops his mum up into pieces. Flash forward forty years, and a masked and mysterious person is putting together the same jigsaw ... but before he completes each piece, he heads out with his chainsaw, and cuts a young, female, co-ed into pieces, taking away the part that corresponds with the next piece of his jigsaw ... he then completes that part of the puzzle, and moves to the next girl ... and the next ... 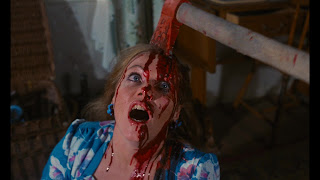 It’s a familiar concept perhaps, but I wonder in 1982 how original this was. Is there an earlier film which riffs on this idea? Sometimes we can forget that films which seem derivative today, were actually the first to do certain things.

The film therefore trots along at a pace, throwing up potential suspects as to who the killer actually is, with police who haven’t a clue, college girls who strip off at the least provocation, and even a random kung-fu dude who appears in one scene, never to be heard from again! And the acting ... oh the acting ... there’s so much scenery chewing and ham here that the filmmakers could have dined out for months. But as with this type of film, it seems not to matter ... what matters is the fun you can have with some buddies and some beer, counting the corpses as they pile up. 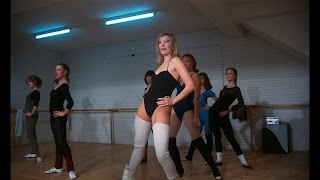 As usual the Arrow release is chock full of extras, as well as a CD of the incidental music, which primarily comes from CAM (Creazioni Artistiche Musicali), an Italian Music Library service. The main theme is particularly good, sounding like Goblin crossed with A Nightmare on Elm Street! 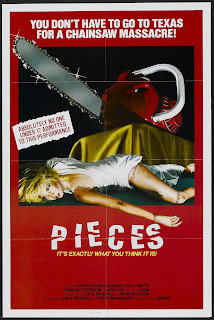