Two films probably from totally different spectrums today ... one is the latest directed by John Carpenter, while the other is a Korean horror film, a sequel to one of the best examples of the art. 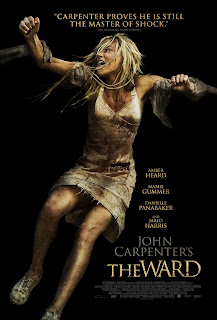 First up then is The Ward, a new film from John Carpenter. Now this is Carpenter's first film as director since 2001's Ghosts of Mars, and so it's been ten years since he was at the helm ... and he's not lost his touch. The film follows the story of  Kristen (played by Amber Heard who you will recall I raved about in Drive Angry) who finds herself banged up in a creepy psychiatric hospital for burning down a house. There she learns that she is with four other girls of similar age all looked after by a spooky matron, and subject to the whims of a ghost which seems intent on killing them all off. The ghost appears to be that of Alice, a former inmate, and Kirsten needs to find a way to escape before she is next on the menu.

The film is very well directed, with lots of great tracking shots and atmosphere. Where it all falls down is in the plot, which is, to be honest, somewhat cliched and evokes a groan of 'oh, so that was it?' rather than stunned amazement. For a good example of 'stunned amazement' then checkout a film called Triangle ... but here we have something which seems very old hat and not really cutting it for a 2011 film.

If you've not seen it, then I won't give it all away. However it is a good and entertaining film which should keep you guessing ... 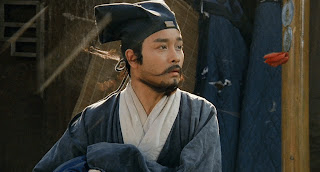 A Chinese Ghost Story 2 is the sequel to Tsui Hark's legendary 1987 film A Chinese Ghost Story (or Sien nui yau wan to give it the original title). I first discovered this gem back when Jonathan Ross presented a series on televison about Korean Horror, and was blown away by it. The sequel is not quite as imaginative and as charming as the original, but it does a good job of trying to match it. Our tax collecting scribe from the first film, Ling Choi Sin (Leslie Cheung), still ruing that he didn't get to be with Lit Sin Seen (Joey Wang), meets up with another mage Chi Chau (Jacky Cheung) and together they find themselves caught between the machinations of a general and of another master magician. Add to this a pair of twins, one of whom looks like Sin Seen (and is played again by Joey Wang) and the scene is set for another batch of magic and monsters set amongst the crumbling temples of the area.

It's a great little film, and the performances are superb. However take my advice and watch the subtitled version - we started to watch the English dubbed version and the English voice actors are awful - totally robbing the film of any sense of professionalism. Another criticism is that there is too much time spent on a large demon monster which stalks them through the film. It's a nice mechanical effect, but it all goes on too long, and the somewhat whimsical 'Freeze' spell routine starts to grate. The cinematography is good as you would expect, and there's a lot of fighting through trees and travelling underground ... but you just have to suspend disbelief and go with it.

Overall the two films are good additions to the old DVD collection ... and worth checking out. I also discovered that A Chinese Ghost Story has just been remade and has an awesome set of posters available ... it seems to be called A Chinese Fairy Tale this time, and I look forward to seeing if it fulfils the promise of a remake ... 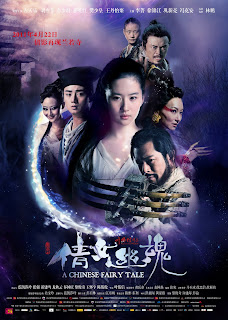 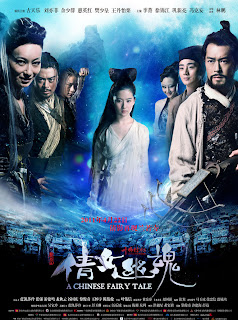 hi david, i just want to thank you for the years of reading you inspired in me through your book column in starburst. I've been going through my old back issues and I really regret not writing to you back in the 1980's. Starburst 200 has a pic of you looking uncannily like david tennants doctor who !

Thank so much Ed. I'm so glad you liked the columns. I really enjoyed putting them together for Starburst, and then Shivers. I hope I covered some good books! These days I don't get as much time to read, but hopefully this blog will cover off writings and musings on films and all sorts of other things too ...

I cant express enough how valuable your column was back then, all of my book purchases were based on your reviews and recommendations...truly the ' good old days '