The Prison In Space 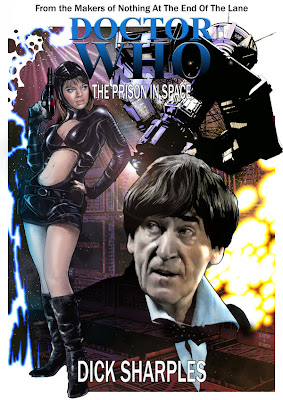 Missing stories have long been something of a cause celebre in Doctor Who circles. And by 'missing' I don't mean those which were made and shown on telly but which have now been wiped by the Beeb and are unavailable. I'm talking about the stories which were commissioned, but for a wide variety of reasons were then canned, cancelled and not progressed into production.  There are probably more of these than there are actual made and transmitted stories, and in the past, and especially prior to the end of the 1980s when there was a Doctor Who Production Office in London, and John Nathan-Turner was in the hotseat, the official view was that these should not be novelised or put in the public domain as they were probably not progressed for good reasons - their not being good enough being a main one - and so they are not 'lost' or 'missing' or anything like that, but just ideas which didn't make the grade.

However in recent years, the approach has softened, and Big Finish have been allowed (as they seem to be allowed to do just about anything) to make audio stories of these lost adventures.

Last year they released the audio of The Prison In Space, a story by Dick Sharples which would have formed part of season six in 1969, the final season of Patrick Troughton's time playing the Doctor. And now we have a sparkling script book as well. This has been produced by Richard Bignell, and is available from Lulu and comes very highly recommended indeed.

It's an A4 sized book, and contains the full script for The Prison in Space, as well as the initial breakdowns and outlines. Moreover it also includes the original scene breakdowns for Brian Hayles' Lords of the Red Planet - an Ice Warrior story which was superceded by The Seeds of Death. Unlike many of these so called 'lost' adventures, The Prison In Space actually almost went into production - costume and set designers were allocated and work had started on it before it was canned. So it's a fascinating look at a 'what could have been' story.

As most previous commentators have said, the main problem with the story is it's 'planet ruled by women' concept and the inherent sexism that this sparks in certains lines of the Doctor and in the approach ... for example all the guards wear tight and revealing black rubber outfits, and Jamie ends up spanking poor Zoe at the end to break the conditioning that she has undergone to convert her into one of these 'dolly guards'.

The book also contains reviews and commentaries from several worthy folk, and articles by Bignell and historian Andrew Pixley placing it all into the context of the time and what else was going on with the show.

The cover is a startlingly wonderful piece of art by Jason Fletcher showcasing one of said dolly guards along with the Doctor and a representation of the Prison itself.

If you are at all interested in the history of Who, then this book is invaluable.

The Prison in Space: http://www.lulu.com/product/paperback/doctor-who---the-prison-in-space/18634892?productTrackingContext=search_results/search_shelf/center/1

Email ThisBlogThis!Share to TwitterShare to FacebookShare to Pinterest
Labels: Doctor Who Books