Return to House on Haunted Hill

It's always a surprise when a sequel turns out to be good fun in its own right, and this one, a sequel to 1999's House on Haunted Hill, which was in turn a remake of the 1959 original, is not at all bad. First off, however, it really has little to do with the original film, aside from featuring the same house, and a similar collection of ghostly inhabitants. This time, there's an idol hidden somewhere in the house which is trapping all the spirits there. The idol is the focus for a disparate group of people to assemble at the clifftop mansion, and go in search of the object. The film is somewhat confused in terms of all the different characters, and I couldn't hope to try and explain it without help ... so here's what Wikipedia says about the basic set up:

Ariel Wolfe is the sister of Sara Wolfe, a survivor of an massacre some years ago in the sanatorium known as the "Vannacutt Psychiatric Institute for the Criminally Insane", which was overseen long ago by the sadistic psychiatrist Dr. Vannacutt. Sara claims that ghosts had killed all those who entered the building, but no one believes her. When Sara commits suicide, Ariel tries to find out why. A diary of Dr. Vannacutt leads Ariel to the cruel past of the Institute. She and her friend Paul are then kidnapped by an unscrupulous dealer, Desmond, who knows a lot about Sara and Vannacutt's Institute. While meeting Desmond and his crew, Ariel realises Sara didn't kill herself, Desmond killed her. Ariel is required to help Desmond to find a precious artifact, a figurine of the demon Baphomet. The artifact in question being said to be hidden somewhere inside of the Institute. While Ariel, Desmond and four of Desmond's accomplices walk into the building, Paul and one accomplice are told to wait outside. Inside, Ariel and her kidnappers meet Dr. Richard Hammer (a university professor) and his assistants, Kyle and Michelle. Desmond used to be a student of Richard's and they begin arguing about the idol. While bickering, it comes out that Michelle is Desmond's new lover, who seduced Richard only to gain information about the sanatorium and the Baphomet idol. 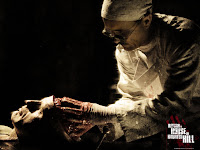 The film is enjoyable as something you can watch and appreciate the GCI effects, inventive deaths, and general ghostly mayhem as it all careers to the ending. The characters are also quite interesting: the two girls are pretty good to look at, Amanda Righetti (Ariel) seems to get wet quite a lot and Cerina Vincent (Michelle) has an amazing chest. There's even Andrew Lee Potts off of Primeval in there - with an American accent - and lots of guns. Another thing I liked was that on the Blu-Ray version, there are nine places in the narrative where you can choose what the characters do, leading to different scenes, characters dying at different points, all leading to - it seems - one of four different endings for the film. The disk also includes the Director's cut - which I assume is the one which Wikipedia's synopsis details (here). I didn't watch that, but chose to experiment with the interactive film, leading to some degree of fun, as the film really does play out differently if you choose different options. I liked the way in particular that, at one point, if Ariel goes for the map, all the cast are killed in gunfire immediately afterwards and the film ends about half an hour early! Some would be cruel and suggest you take that option to shorten the misery, but I did genuinely enjoy the film, and will watch the Director's cut at some point to see what was actually in that version.

As I say, as sequels go, it's a good way to spend an evening and quite diverting. There's even some lesbian zombies, and a nurse ghoul who seems to be straight out of Silent Hill (though nowhere near as creepy as those rubber-clad ghoulies). Sometimes a horror film doesn't have to pretend to be high art, and is just there to be drawn along with, laughed at, and in this case, interactively adjusted.
Posted by David at 5:27 pm