The Doctor and Vincent 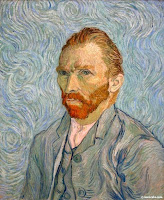 What an interesting little story. I was pleased to see that the second 'guest writer' slot in this season came up with something which felt a little more like Doctor Who than the earlier Dream Lord one. Richard Curtis of course has a great track record, but this could have resulted in something starring Hugh Grant and Rene Zelwegger, involving a romantic intrigue, missed opportunities, and of course a wedding ... but instead we got a Scottish Vincent Van Gogh fighting an invisible chicken. That's a little unfair perhaps, as the monster was apparently more based around the paintings of Hieronymus Bosch, but the head was very chicken-like, and the fact that it was invisible and made sort of squarking noises made me imagine something like a giant Big Bird-like creature off of Sesame Street. Van Gogh, however, was something of a revelation. Completely brilliantly played by Tony Curren, he was totally believable. From the moment he first appeared, looking exactly like the Dutch artist, he held the screen. I loved his interactions with Amy and the Doctor, sympathised for his depression, and cheered him on in the gallery at the end. Curren nailed it completely. I even loved his question to Amy, asking if she came from Holland too as she had the same accent as he! Obviously the TARDIS translation circuits are a little fritzed, making Dutch sound like Scottish in translation. The flow of the story was gentle, but nicely paced, and the whole invisible chicken thing was a bit of a red herring really (lots of animals in this blog). The meat of the episode was the final ten minutes which had me crying both times I watched it ... moving and respectful, brilliantly acted, superbly paced and played ... it's testament to what Doctor Who can do given the right material. Bill Nighy's cameo was equally excellent ... perfectly pitched by the actor, and totally believable. In fact there wasn't anything really duff about the episode at all ... except for the chicken perhaps. Even the music was bearable! 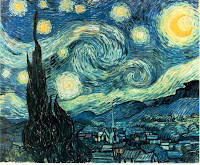 One thing I did puzzle over: right at the start, we see a cornfield and Van Gogh painting it, with a trail left by an invisible monster wending through. We are then told that this was one of the last pictures that Van Gogh painted before his death? But then the Doctor and Amy go back to a year before his death and kill the monster ... yet the painting still has the monster trail in it at the end ... but the monster was dead by this point, so why did Van Gogh paint it like that? As I say, not really important, but it confused me. Overall though, a lovely episode, touching all the right nerves. Next week we have that James Cordon off of Gavin and Stacy in a house. Personally I don't really get why he is so flavour of the year at the moment ... but we shall see how he fares.
Posted by David at 5:54 pm

I couldn't get over how Bill Nighy's brief but brilliant performance resembled that of David Tennant's 'Doctor' especially with the glasses. Ironic really, considering he was one tipped to become the Doctor at some stage!