Easter is a time for films, and so courtesy of the local Blockbuster, we rented four for the long weekend.

THE FOURTH KIND I'd read a bit about this one, and nothing was very complimentary. We got it because Zee wanted to see it, and, well, it has Milla Jovovitch in it. It's a fairly standard alien abduction story, with a conceit (which I don't believe at all) that it's all real. This exends to having supposed genuine footage in the film itself of the actual protagonists, while Milla et al act out what happened. It does have a couple of very nice sequences in it which are unnerving. When the chap has a fit on the bed around 100 minutes in, it's really quite creepy, as is the bit where the policeman sees the UFO over the house - and so do we for about 1 second. The ending however is totally spoiled by being 'seen' in fizzing and fuzzing camcorder tape while we hear the voice of the alien speaking to us in Ancient Sumarian (translation helpfully provided). I was impressed that they got through the whole film without ever actually showing the alien - the scene where it enters Milla's house and abducts her is very scary, and you never see a thing. But this is also the problem - these days we expect to see something ... and to have everything relayed to us during the exciting moments through a third person camcorder picture which is blipping all over the place making the picture unseeable was somewhat disappointing. Overall the film wasn't a total wipeout, and I'd give it maybe 5 or 6 out of 10.

THE IMAGINARIUM OF DOCTOR PARNASSUS I had no pre-expectations of this at all. I knew that Heath Ledger had died mid-way through making it and that as it was a Terry Gilliam film, I should expect something surreal. But it blew me away. The plot is fairly straightforward. Dr Parnassus (Christopher Plummer in best Dumbledore mode) has made a deal with the devil (Tom Waits) to see who can first get to 5 souls. Parnassus has a rickety sideshow trailer and through a cheap fake-glass portal on there, people can enter into a land from their own imagination. At some point they must make a decision, and if they choose wrong then the devil wins the soul. Travelling with Parnassus is his 15 year old daughter (Lily Cole) who will be forefit to the devil if he wins before she turns 16; a dwarf (Verne Troyer in a brilliant performance); and a young man in love with the daughter (Andrew Garfield). Into their lives comes con-artist Heath Ledger, on the run from the mafia for money owed. He manages to turn the sideshow around and to start to get what Parnassus wants ... but can it all be done in time. As with all Gilliam's films, the visuals are rich and amazing. Whenever anyone enters the mirror, they find themselves in some fantastic CGI land, but it's all so well done, and genuinely leaves you wide eyed in amazement. I loved the way the film all hung together, and appreciated the use of several London locations which are very familiar to me: Blackfriars bridge, Borough Market, Southwark Cathedral ... The acting is all top notch, and Ledger's death caused some rewriting where his character is played by three other actors when they go through the mirror at different times: Johnny Depp, Colin Farrell and Jude Law, all of whom do a fantastic job at inhabiting this character through the adventures. I loved this film, and it's one I will buy for myself when I can find it cheap on Blu-Ray :) Probably 9/10 from me.

NEW MOON Oh dear. We got this one because Zee wanted a laugh ... but it wasn't a laugh, it's possibly the worst thing I've seen on DVD for some time (and considering that we watched Zombie Flesh Eaters 2 the other night, that's saying something). The plot ... there isn't one. It seems to consist of sulky-faced teenager Bella being dumped by her sparkly vampire man Edward, and then moping about it for months and months. She is so joyless that I can't see why anyone would spend any time with her at all. And Edward is just as bad! We got about 45 minutes into the film, and the Blu-Ray player decided that it had had enough and started to slip and pause the film. We thought this was a sign and so stopped watching it. A dreadful, dreadful piece of cinema with no redeeming features that I can see. At least Twilight was fun to watch in some areas, but this, this is angst-ridden plotless rubbish. The makers should be ashamed at themselves. 0/10 from me on that one. Waste of film. 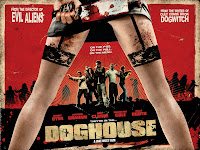 DOGHOUSE I'd heard about this one, and even saw some of the preproduction images for it (We had dug them out for Telos' book It Lives Again! as Axelle discussed the film in there). It's a comedy Zombie film, probably most aligned to Shaun of the Dead, but in the mould of Zombieland too. A group of blokes, all having been dumped or in trouble with their wives and girlfriends head off to the deserted town of Moodley to get drunk and forget their troubles. One of their number is getting divorced and this is their excuse: to help their mate. When they get to Moodley though, they find it deserted except for hoards of zombie-like women, all insane and out to kill any man they find. Their mission is then to survive to the end of the film. I loved this. It's a great fun film with lots of silly moments - I laughed out loud at the Zombie granny with the Zimmer frame. The acting is strong - it has Noel Clark in it for that almost obligatory Who connection - and the set-up is very neat. It transpires that it's all a government test of some toxic weapon to turn women on men and thus win wars without needing soldiers ... nice. The effects are grisly and gruesome - I had to look away at the finger cutting scene - but the comedy is also played to good effect. The female Zombies, or Zombabes as they are termed, are brilliant. All with the tools of their trade: cleaver for a butcher, scissors for a hairdresser, dressed as a shopgirl, a hooker, a bride, a goth monstrosity, a huge hulking housewife with curlers ... and they move fast too, with intelligence to take an axe to a pole supporting a platform on which one of our heroes is hiding. It rattles along at a nice pace, and is a very good way to spend an evening. I don't think it's quite as good as Zombieland for entertainment value - but then that film is pretty amazing - but it does a very good job. 8/10 from me for that one. David
Posted by David at 9:51 am