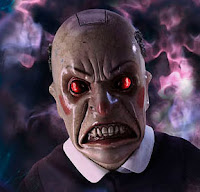 The title of the second Who episode in the series has an intersting ring to it. 'The Beast Below' ... as others have stated, perhaps something of an euphamism there. I liked the episode overall, though it did leave me a little cold on first viewing. There's also a few loose ends which I didn't appreciate, having hoped that we had seen the end of this sort of thing in the scripts. The Smilers are a case in point. What exactly were they? Some sort of robots? But who was controlling them, who made them, and why do they sit in little fairground booths? And how could their faces spin *three* times to show, smiling, sad, and then angry. I know it looked great and spooky, but then it was unexplained, and I didn't like that. And Queen Elizabeth X ... I wondered when she got black and cockney? And was she supposed to be 100s of years old? I heard something about slowing time down but it didn't make much sense really. And when did Amy record that frantic warning to the Doctor on her voting booth screen? There weren't even any controls allowing you to do that were there? And then there's the elevator shaft of doom ... leading to the Beast's mouth. The Doctor makes it sick ... and they're back on the spaceship? Why weren't they vomited out of the creature's mouth into space then? It was suggested to me that maybe they wee ejected out of a blow hole back into the ship ... but that was never mentioned or seen. And come to that, how did that kid who was 'taken' at the start end up back in the ship - the space whale could tell the difference between a kid and an adult when they're in its mouth? I dunno, it all seemed to be hanging together by threads really, but as with the last 5 years of Who, it rattled along at such a pace that you don't have time to notice these things while you're watching it. I quite liked the ending with Churchill and the Dalek ... but I always cringe when I see impressions of real characters in Who, it just seems wrong somehow - the action should be alongside the events of history, not slap bang in the middle of them ... but we shall see ... In other news, watched a couple of films recently:

Up was great fun. It's another Pixar piece and that company can really do no wrong. It had us crying in the first ten minutes, and then presented a very funny and fun journey to a wilderness waterfall for the main characters. All animated superbly, and on the blu-ray it looked awesome. Think we'll have to buy that one. Squirrel!

The other film was a horror called Trick 'r Treat, a wonderful Halloween piece of the type which we all thought would never be made again. Someone commented to be that it was a film about Halloween, which celebrated it, and this is spot on. It's not a slasher or a gore film, but an intelligent portmanteau movie of four stories which all cross and intersect as the film progresses. There's the tale of four twenty-something girls out on a night out, looking for male friends to spend the evening partying with ... We have the local Principle, and how he spends his Halloween - preparing 'special' candy for the local kids, and then going out in fancy dress ... There's the couple who don't really like the holiday and who decide to dismantle it all before the night is over ... There's the story of a group of kids who decide to visit the site of a coach crash many years previously, and in doing so disturb something which should have been left alone ... And finally the tale of a Scrooge-like old man, and how he is visited by the spirit of Samhain before the evening is over. All the cast and performances are superb, the film is wonderfully directed and rich in imagery and idea, and the little Samhain demon creature is a brilliant creation, appearing in all the stories somewhere ... watching ... waiting ... and perhaps claiming more than just candy ... I loved the film, and can see it becoming an October 31 staple to rewatch.
Posted by David at 4:57 pm

There was a pretty large and obvious "record" button. Plus we don't know how much time elapsed after her watching the video, as it was edited to demonstrate the erasing of her memory.

It was also established that the whale's mouth was sealed, hence the surgically-inserted feeding and drainage tubes.

The problem I had was the twin facts that spaceships don't need engines in order to continue moving forward (c.f. Newton's laws of motion), but they do need quite large generators to maintain life support. No evidence of any solar panels on the surface of the ship.

Interesting OrangeDog ... there was a 'Record' Button indeed, but I took that as being 'Record your agreement' sort of thing rather than to actually record a piece of video footage ...

I really don't remember them saying that the whale's mouth was surgically sealed ... maybe I missed a throwaway comment somewhere about that ...