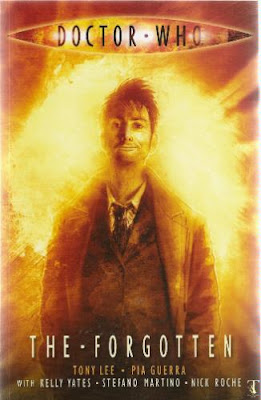 I managed to pick up a paperback edition of Tony Lee and Pia Guerra's graphic novel The Forgotten a month or so back and had a happy time reading it on the way to and then back from Paris, bracketing a nice weekend away. The strip had been published originally by IDW in their Doctor Who series (which, in a very rubbish way, is only available in the US. Such a shame as it's really very good) and now has been collected in this graphic novel format. I picked up a copy from Forbidden Planet, but it should be available online I guess. FP also stock some of the individual comic magazines, but a good place I have found is Graham Crackers, a retailer based in the US. Their website (www.grahamcrackers.com) lists just about every issue still available. Anyway, the idea behind Tony Lee's tale of ten Time Lords is straightforward, and yet it manages to work so well that I think it's probably the best multi-Doctor story we'll never see on television. The Doctor and Martha (for she was the companion at the time of writing) arrive in a museum which seems to contain a multitude of objects all related to the Doctor in some way. Unfortunately the Doctor has lost his memory and has no idea why this is. The pair stumble across a room which contains all the Doctor's standard outfits, along with a key item for each. 1st: cane; 2nd: recorder; 3rd: keys to the TARDIS; 4th: bag of jelly babies; 5th: cricket ball; 6th: cat badge; 7th: umbrella (ella, ella, eh, eh, eh); 8th: cravate; and 9th: psychic paper. By holding each object in turn, the Doctor is able to 'see' an adventure his earlier self had, and in doing so it returns part of his memory to him. The ideas come thick and fast, with mini-adventures interspersed with the main narrative. As the Doctor remembers, so he comes under attack, first from Autons, and then by giant spiders before finally being hunted by a Sandminder Robot and a clockwork Droid. However a mysterious someone is controlling events from behind the scenes, and I won't say more or it will spoil the lovely surprises that this story has to bring. I loved all the continuity elements - and there are a lot of them - but they are worked into the story brilliantly and don't seem forced at all. Indeed, some points of continuity are worked into the resolutions as well. Overall the story has a very satisfying feel to it, and you can tell that the creators have a great love for the subject matter. One of the small pleasures for me was trying to spot as many of the objects in the museum as I could, I managed quite a few, but I wonder if there is a definitive list anywhere ... 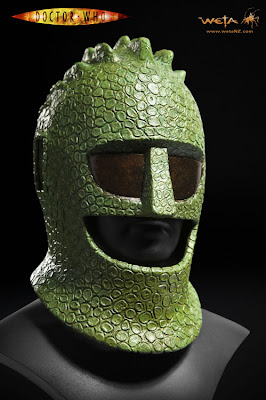 Another wonderful item which I have to rave on about is an Ice Warrior Helmet ... a what I hear you cry! Well, the Ice Warriors from Mars are probably the last, great, Who monster from the dim and distant past not to make an appearance in the new series on television. We've had the Daleks, the Cybermen, Sontarans, the Master ... even the Macra ... but no Ice Warriors as yet ... give it time I say. Anyway, this is one in a range of scale helmets produced by the amazingly talented people at Weta in New Zealand. When I first heard about the helmets I was a little unsure ... I had seen similar ranges for Lord of the Rings and Narnia amongst other current film franchises, but wasn't convinced that Doctor Who really lent itself to such a range. Well, if the quality of this Ice Warrior one is anything to go by, this should shape up to be a pretty awesome little addition to the collectors' shelves. It comes in a rather nice little printed box, with a great pic of the creature on the front. Inside, nestled in protective polystyrene is the helmet, and also a smart looking stand on which to display it. The first impression is how heavy the helmet is. After all it is cast in metal, and then painted up. It's a brilliant re-creation of the Martian creature, complete with red eye shields. If I was going to be picky, I'd suggest that a mouth section would have completed it nicely, but I can understand why that wasn't done, as the mouth is not really a part of the helmet, being part of the creature underneath. However in the series, it's suggested that the helmet might also be a part of the creature, with electronic 'ear pieces' and so on ... The helmets are limited to 500 each, and the limitation number is given on the base of the stand. With others in the range including a ceremonial Time Lord headpiece and a Cyberman head, they would look very nice indeed lined up in a display cabinet I think. Even the price isn't too shabby, being around the £35 mark each with shipping of £7.62. They are available from Weta direct from their website at www.wetanz.com. The helmets also ship from the UK directly, and don't come winging their way from New Zealand!
Posted by David at 4:38 pm