Doctor Who - Daleks in Manhattan

Writing about a TV show can be great fun, but strangely, the hardest reviews to pen can be those where you loved the show/book/film and so on. I found this about Daleks in Manhattan. I really enjoyed watching the episode on Saturday, and then I loved it even more on a re-watch. It seems to encapsulate everything in an effective and economic way. Nothing felt rushed, and everything seemed to make sense. And yet there was so much packed into it! So much information and scenes and characters that logic says it should have made no sense, however it did make sense, and was a wonderful slice of Doctor Who.

We open in Manhattan, at the New York Revue, where Tallulah (nicely played by Miranda Raison, although with an annoying 'Sandra Dickinson' type accent) is preparing to go on stage. She is given a white rose by her beau Laszlo (Ryan Carnes), and heads off. Laszlo however hears noises and on exploring, is confronted by a pigman! This is a great little opening sequence, nicely setting the scene and revealing the first monster before the credits run.

It's a day or so after November 1 1930, and the Doctor and Martha arrive at the base of the Statue of Liberty on Liberty island, New York. The Empire State building is still being constructed and the depression is on, leading many man to become unemployed, heading for 'Hooverville', a shantytown set up in Central Park. The Doctor and Martha head there and meet up with a man called Soloman, de facto leader of Hooverville. Soloman is very well played by Hugh Quarshie as a man of peace and common sense, who is not afraid to get his hands dirty as well. In fact, the only real question here is how the Doctor and Martha got from Liberty Island to Central Park! It's about ten miles away from Battery Park at the South of Manhattan Island, and I have no idea if a ferry was running from Liberty Island to Manhattan at that time.

Meanwhile, at the Empire State Building, Mr Diagoras (great name), played in perhaps the weakest performance of the episode by Eric Loren, is overseeing the completion of the structure, but his masters want it finished more quickly. Then, of course, we meet the masters, and given the title of the episode, there was really no point in dragging it out - it's the Daleks - and their first appearance in the art deco lift, flanked by two pigmen is brilliantly handled. Their voices are superb courtesy of Nick Briggs who really manages to breathe life into the creatures. I was reminded throughout by their appearance in The Evil of the Daleks back in 1966 as their talking and scheming was reminiscent of that earlier story. The Daleks want the tower finished, and mention something about a gamma strike being accelerated, and Diagoras says he knows where more workers can be obtained ... Hooverville, where he wants men to clear a ceiling collapse in the sewers. This is actually a little strange: if the Daleks wanted men to finish the building, why does this become wanting men to clear an apparently non-existant sewer collapse (ie men for the Daleks to either turn into pigmen, or to use their intelligence for an as yet unknown purpose). Oh well.

The Doctor and Martha volunteer, along with Soloman and a man named Frank. They all head into the tunnels and follow tunnel number 273. The Doctor finds a green glowing lump of organic matter on the floor which looks for all the world like a Rutan (ref Horror of Fang Rock) and pops it in his pocket to analyse properly later on.

Meanwhile the Daleks/Diagoras want some Dalek base panels affixed to the radio mast on top of the building ... The Daleks are pleased with Diagoras and take him to meet their leader, the black Dalek Sec, in the basement of the building. I wondered why Diagoras pulled his gloves on when meeting Sec. Strange thing to do.

Now some threads start to come together. The Doctor, Martha, Soloman and Frank are chased by pigmen, and all but Frank escape up into the theatre where Tallulah greets them with a gun. It's two weeks after the events of the pre-credits where Laszlo disappeared and as the Doctor cobbles together something to help him analyse the DNA of the organic matter he found in the tunnels, Soloman returns to Hooverville to rouse the men to take up arms and defend themselves. Meanwhile Martha sees an altered Laszlo watching Tallulah in the stage show and gives chase.

Poor Diagoras is to be used as part of Dalek Sec's final experiment and is bodily dragged into Sec's casing by the mutant within - a wonderful image and very well realised on screen.

The Doctor realises that the fundamental DNA sequence of the green blob is 467-989 ... which means the planet of origin of the matter is Skaro - he now knows what he's up against. Daleks!

Sec is in trouble. Having 'eaten' Diagoras he has a nasty case of indigestion it seems. There are lots of neat Dalek references dotted around. Words like Dalekanium, Transgenic Laboratory and so on ... but the Doctor (who strangely has not been spotted by the Daleks at this time - usually he would be singled out and sentenced to extermination within seconds of meeting the creatures) tells Martha to ask what's happening as they don't know who she is. She does so, and the Daleks announce that they are bearing witness to a new age, the birth of a Dalek for life outside the shell ... 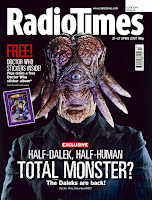 Sec's casing opens once more, and a humanoid figure staggers out - it is Diagoras, but his head and hands (black gloves and all) have been transformed into a hybrid between human and Dalek. The creature announces in Diagoras' voice that he is their future! This is a brilliant final scene, and I only wish that the Radio Times had not gone and spoiled it for everyone by revealing the monster on the cover! What a waste of a great cliffhanger, and the image could have been used on the following week's magazine anyway. And the voice! What's up with the voice? The creature sounded just like Diagoras and nothing like a Dalek, not even a hint ... not good.

Hopefully next week things will pick up. I have a worry though, that with the Daleks being so good in this episode, that the introduction of a 'Davros' figure will draw the attention away from them, and they will be reduced to mere stooges which is what hampered and made them less of a threat throughout the late seventies and eighties period of the show. Genesis of the Daleks is a true classic, but this is down to a great script and a bravura performance from Michael Wisher as Davros. The Daleks themselves never have much impact in any subsequent story as all the attention is always on Davros (and he became increasingly stereotypical as a ranting character as well). I hope the same won't happen here and that the Sec/Diagoras hybrid has more to do than just take centre stage.

Overall, I really enjoyed the episode. Lots happening, great visuals, good characters, and Daleks which are actually scheming and behaving like Daleks should. It was scary in the sewers, and the Daleks appeared a lot - loads to keep the kids happy. It's not explained how the Daleks survived being drawn into the Void at the end of Doomsday though - we know that Dalek Sec survived (with his convenient time shift), but we never saw the other members of the Cult of Skaro get away. I guess we just have to assume that they did ...

You asked why Sec doesn't sound like a Dalek, well obviously the Daleks 'electronic' voices are generated by the equipment in their shell since the mutants either can't talk or wouldn't have a voice you could hear.

And I exepect the remaining Daleks won't be able to overcome their need for genetic purity and Mr Sec will meet a nasty end on Saturday.

That's true - I'd not considered that. I think I was just expecting him to sound a bit like Davros and it was a shock when he didn't ... we shall see how it all pans out on Saturday though.

I suspect that if one member of the Cult of Skaro has a time-shift device, then they all do. Doesn't make much sense otherwise, given the Cult's status.

Also, did you notice that the Daleks didn't actually kill anyone in this episode?

I thoroughly enjoyed this. Easily the best episode since Impossible Planet.