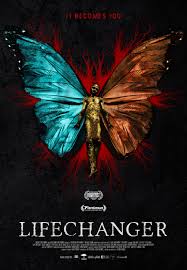 Lifechanger is an interesting film. While it basically follows the same character, this character is a shapeshifter and can take on the form of other people. But in order to do so, it needs to kill the person it is replicating, leaving them a sort of mummified husk.

It's a simple idea, and yet I don't think I've seen it done in film before. Years ago, Stephen Gallagher wrote a novel about a shapeshifting killer called Valley of Lights, but that's about it!

Written and directed by Justin McConnell, it follows the character of 'Drew' who narrates the film, and follows the shapeshifter through a variety of personas. What I really liked here was that it's a film with several 'lead' characters in that their appearance (and sex) changes as the film progresses. There's a real sense of loss too as each character dies to allow 'Drew' to continue living, and as each body he takes starts to decay and fall apart after a short time, there's a lot of body-hopping to be done.

There's also a romance element in that 'Drew' loves a girl called Julia, and his body hopping eventually leads him to a temporary happiness with her ... but there's a twist and ultimately he cannot take her body when his own starts to decay, and so he decides to die this time - allowing his body to crumble away. But instead of this happening it becomes a sort of cocoon, and out of this comes an old man. Now whether this is meant to be Drew as he really is, or a different variation on the shapeshifter is unknown, and the film ends on a slightly unsatisfactory note as a result. A little more explanation in the final scenes would have been appreciated. 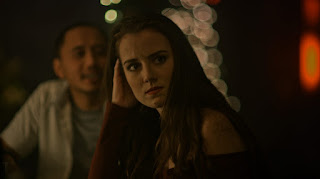 Overall though it's a good and solid film, with a lot of good ideas and some great practical effects too. Well worth a look.