Review: The Official Doctor Who Cookbook 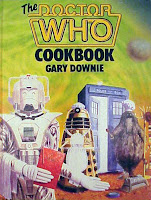 It's been some time since we had a Doctor Who cookbook produced under official license. The last time was way back in 1985 when Gary Downie, partner of the then-television producer of the show, John Nathan-Turner, and sometime choreographer, produced one for W H Allen, at a time when it seemed that anything with Doctor Who on the front could be published ... On that occasion the recipes were sourced from people who had appeared in or had some other connection with the show and was basically their favourite dishes, but with 'who-ified' names. No attempt was made to make the dishes look like actual monsters or aliens and so on ...

Then an unofficial book appeared a couple of years back in 2012, self-produced by Chris-Rachael Oseland and available on Amazon. What's interesting here is that in this new official cookbook, the author seems to have had some identical ideas as Oseland.  So both books feature Bow Tie Pasta, Jammie Dodgers and, of course, fish fingers and custard, but then I guess that some things are too obvious. The main difference is that Oseland includes loads and loads of recipes inspired by just about every story of the new series. There's an updated and revised edition of this book in the works, which Oseland wants to publish in a better format than the original self-published one ... 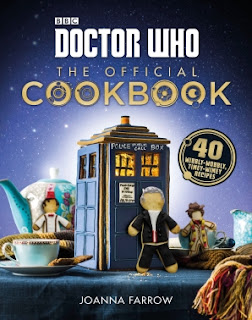 In this new BBC book, which contains just 40 recipes, one distinctly gets the idea that the recipes are way too hard for most kids to make, and the decoration relies on you being an expert and professional artist, sculptor and painter. Most of the recipes are shown in finished form as perfect cakes, pastries and dishes, but to get them looking like that would just not be possible for most mortal cooks. I'm reminded of the many internet sites which show the 'aspiration' against the 'reality', showing just how hard it is (here's an example ... http://www.hexjam.com/uk/food-drink/18-expectation-vs-reality-cooking-fails). There's an 'Exterminated Jelly Skeleton' which requires you to make perfect-looking bones from meringue ... which is the stickiest and hardest to shape substance known to man! The recipe says: 'Pipe an 8-9cm length of meringue onto the paper. Pipe an extra blob at each end to create a bone shape.'  Hmmm ... can't see the result looking even remotely like the perfect bone shapes shown in the photograph ... as for the bread baked to look like an Ood head ...!

So I'm not quite sure who this book is aimed at.  Even something which should be simple, like making little biscuit Doctors, relies on having a cutter in the right shape (or you have to trace a shape provided in the book onto paper and then somehow use it to cut each little man out ... But then you need a rock-steady hand, lots of different colours of icing, and a thin icing pipette to be able to decorate them ...

On the Cyberman head open sandwiches, there's a blob of hoisin sauce for the eyes, but in the picture, it is perfectly positioned and even has the little 'tear drop' present on the bottom corner ... not something that I suspect is even remotely possible to do in the real world!

The Snowman cake has perfectly jagged icing teeth ... again I feel that the actuality would be something looking more like the Snowman had been battered with a hammer and then partially melted in real life ... all the images show the results as being too perfect and finished. In fact to the extent that I wonder how much photoshop has been employed to make the images look perfect. The credit reads: photography and prop styling - Haarala Hamilton ... but what does 'prop styling' mean?

Overall it's a nice looking book, full of colour pictures, and the ideas are good and cover all elements of food from snacks to savoury to desserts, sweets and cakes.  £14.99 is also not too expensive for the book, making it maybe an impulse Christmas buy for someone who loves cooking?  But to be honest I'd hate to have to try and actually make some of the recipes as I just know that my results would bear little resemblance to the perfect images in the book.

DOCTOR WHO: THE OFFICIAL COOKBOOK is published by BBC Books. £14.99 hardback