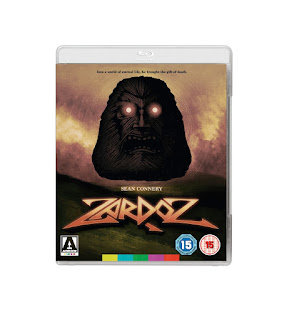 Let's get the elephant in the room out the way immediately: Zardos doesn't make a lot of sense. Director John Boorman has infused with a very hippy-esque sensibility and the science fiction trappings just serve to heighten the feeling that no-one really knew what was going on, but just went with it. Once you get past this, however, the film is lush and beautifully shot, with some great ideas at play: and of course there's Sean Connery in those red trunks!

The film is actually all about Connery, playing a character called Zed, and he's in most scenes as we follow him from his life as a horsebacked Exterminator, killing humans seemingly at random, to his plan to get inside the giant floating head of their god Zardoz, whose effigy arrives through the sky and spews guns and ammo out through it's mouth. 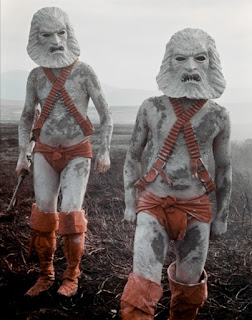 Once inside, Zed kills the head's operator, a man called Arthur Frayn, and arrives in a place of tranquillity and peace, where humans live in comfort and are well fed and watered. But all is not as it seems, as these people are unable to reproduce, and they punish each other by enforced ageing (otherwise they live forever). So poor Zed is made the subject of a hunt, and is used for his seed, while they give him their knowledge in return (and these scenes are rather nicely done, with projected images onto the players moving to show the transfer of the knowledge and skills). 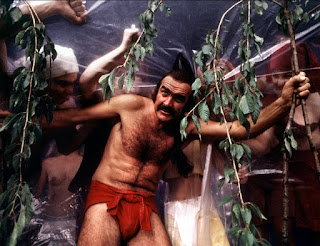 But Zed has a plan and that is to bring his fellow Exterminators in and to breach the barriers which keep them out ... and thus they arrive and kill everyone (however they want to die, so this act is welcomed).  Zed then runs off to the crashed giant head with Consuella (Charlotte Rampling) who is pregnant with his child ... and they sit there then for the rest of their lives as the boy grows, leaves them, and they crumble to skeletons and dust ...

It's a bleak ending, and provides no answers or real conclusion. But then the whole film is like that. Overlong (it's 105 minutes apparently, but feels closer to 120!), it plods majestically along, showing us scene after scene, we meet people who have no meaning ... John Alderton as Friend seems out of his depth, Consuella is all for having Zed killed until he shares his seed with her, and then she's happy to run away with him ... there's decadence and boredom for those who are immortal, and death through slavery or by the Executioners for those not inside the protected area ... A very puzzling film indeed. 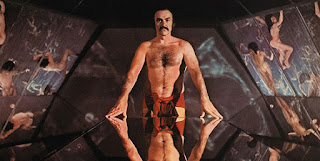 As usual the transfer on this Arrow release is excellent, and the detail really helps to bring Boorman's visions to life. Connery is great as he moves through the film, and the sets and imagery is unique and often startling (if inexplicable).

In terms of extras, there aren't that many this time - maybe Arrow were limited in what could be included. 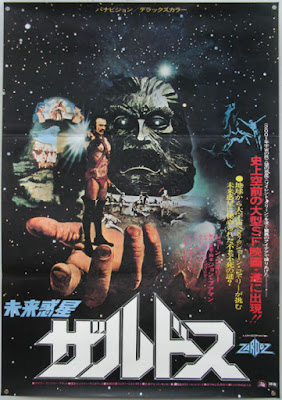