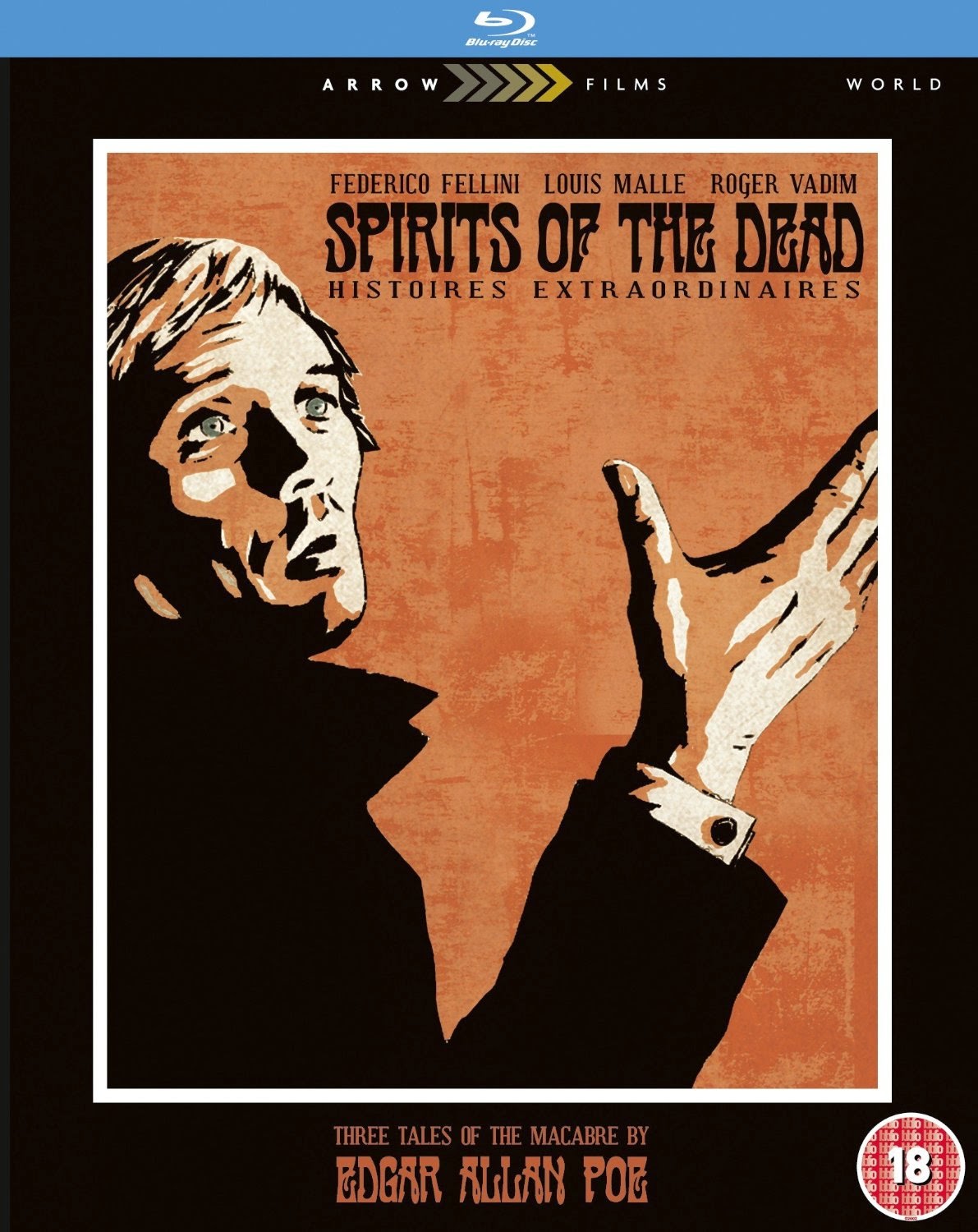 As a fan of horror film, it's always a pleasure to find something which I haven't seen before, and this presentation from Arrow of a 1968 trilogy of adaptations of Edgar Allan Poe short stories was fascinating indeed. I'd not heard of the film before, and it seems to be an English/French/Italian production, with the first two segments (directed respectively by Roger Vadim and Louis Malle) being French, and the final segment (Federico Fellini) being Italian.

The three stories, Metzengerstein, William Wilson and Toby Dammit, or Never Bet the Devil your Head, are each given a bit of a rethink and reimagining by the writers and directors, and while the essence of them can be traced to the Poe originals, they all come over far more as experimental sixties film-making, than the more popular Poe adaptations by Roger Corman.

Metzengerstein stars Vadim's wife and muse Jane Fonda, and also her real life brother Peter Fonda in a tale which is confused in the telling, but which seems to be about a decadent woman (Fonda) who has a closer relationship with her horse than with anyone else. Peter Fonda plays her cousin for whom she harbours an incestuous love, and when he is killed in a stable fire, a black stallion appears and Jane Fonda rides off on this into the proverbial sunset.  The segment is beautifully shot (overall the Blu-Ray has a brilliant transfer and presentation throughout) and the costumes are lush, sexy and original, as befitting Fonda and Vadim. His stand out film with Fonda, Barbarella, was released the same year and has a similar detail towards the costumes and outfits which Fonda wears. Unfortunately while the segment is the closest to the familiar Corman adaptations of Poe, with its cinematography, settings and approach echoing elements of The Fall of the House of Usher, The Pit and the Pendulum and The Masque of the Red Death, the narrative is confusing and ultimately ends with puzzlement as to exactly what it was all about ... 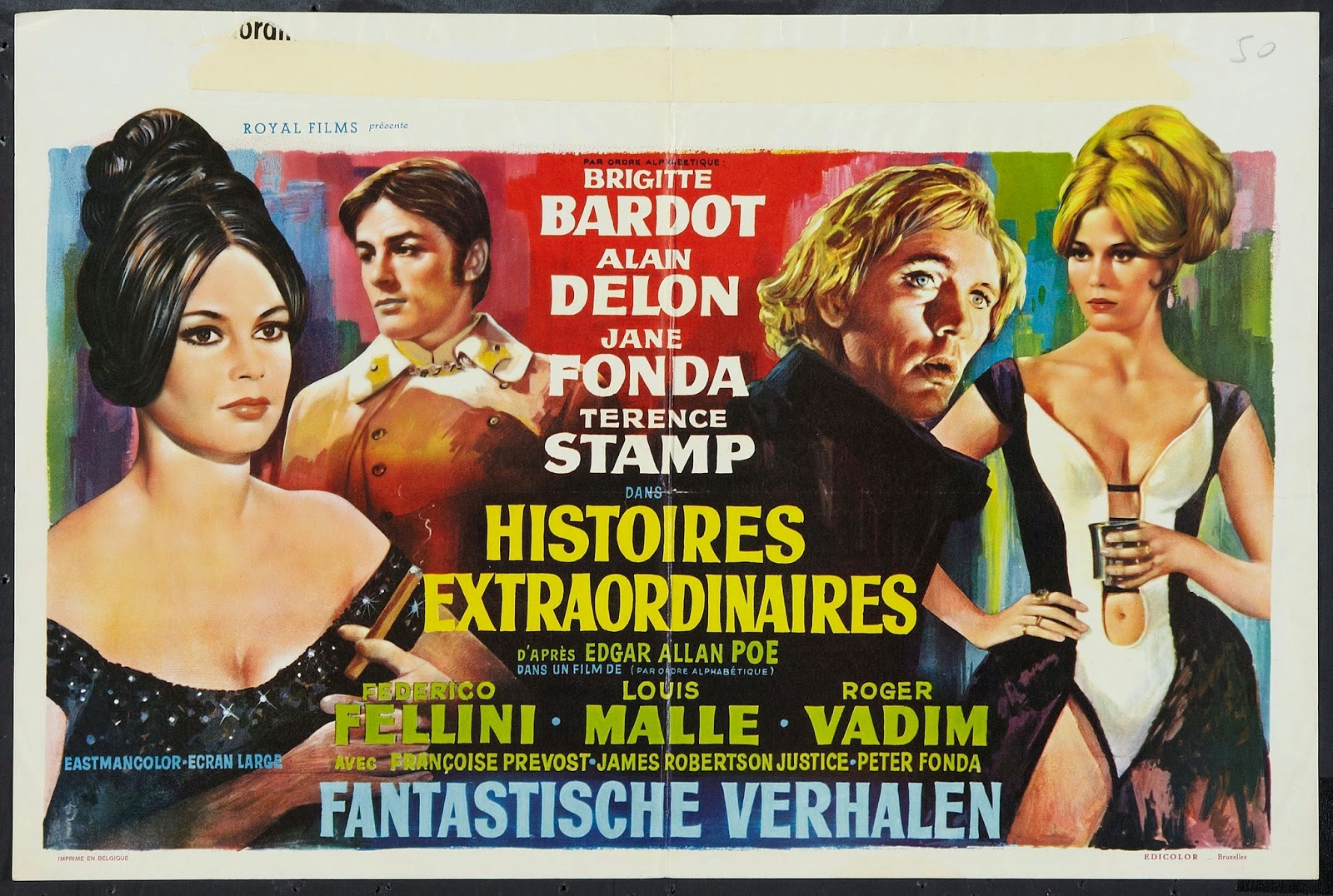 The second segment, William Wilson, has a similar internal theme of debauchery, where the title character, played by Alain Delon, confesses to a life of evil to a priest. The story, told in flashback, shows how the young Wilson was a tormentor at school of the other boys, and how another child with the same name would appear to thwart his exesses. As a young man, he tries to gain the sexual favours of Giuseppina (played by Brigitte Bardot) by cheating at cards - a fact revealed when his namesake appears and reveals all. Wilson then fights with his double and kills him, which also then results in his own death. It's again a confusing narrative, with doppelgangers appearing for several characters, and the opening sequence, where Wilson is running to the church, is interspersed with shots of his own death, falling from the church belltower. So the viewer sees a foreshadowing of the ending before the story is even presented. 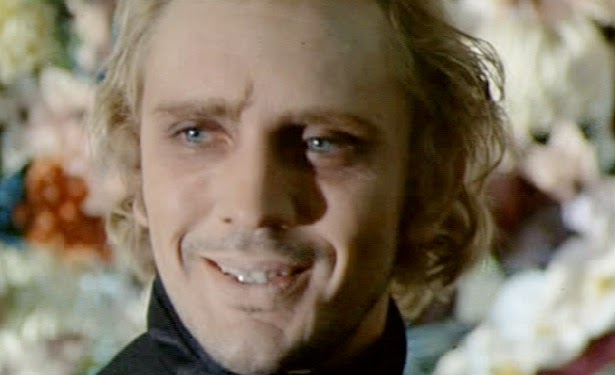 The third and final segment, Toby Dammit, is, as perhaps expected from a Federico Fellini film, strange, disjointed and probably the hardest to understand and access. The Poe story concerned a young man who liked to bet on everything he does. This leads to him betting his own head to the Devil that he could jump a turnstile over a bridge ... a wager he fails to win, losing his dead to the Devil. In Fellini's film, Toby Dammit is played by Terence Stamp, who gives a brilliant performance as a drug and alcohol addled actor, stoned and out of it, swaying through a confusing melange of television interviews, sycophants, hangers on, and parties. He seems familiar from similar, later, characters such as Johnny Rotten who seems to have modelled his whole persona on Stamp's portrayal here. The segment ends with Dammit getting the Jag car he wanted, and driving through foggy streets until he arrives at a broken bridge, where the Devil - in the form of a beautiful blonde, bouncing a white ball - appears. Dammit tries to jump the bridge and fails, the white ball then bouncing past his decapitated head. As for any sense of plot, it's very confused and obscure, but there are nuns (of course) and the imagery and overall impression of a successful life destroyed by drink and drugs and excess is very well brought across. 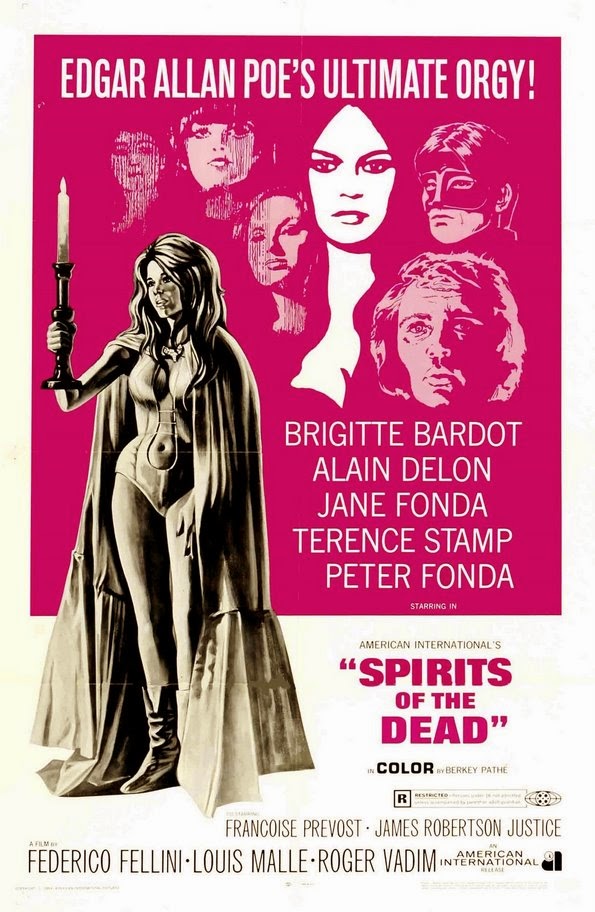 Overall the Blu-Ray presentation is exemplary, with various options to watch in English, or French with subtitles. There's even a version with some narration by Vincent Price (who of course was the 'face' of all of Corman's Poe adaptations). The transfers are beautiful, and allow the cinematography to be fully appreciated.

Overall this is a fascinating slice of sixties cinema, with contributions from three key contributors to the era's output. Terrance Stamp's performance is exemplary, and it's good to see Jane Fonda in another Roger Vadim production.