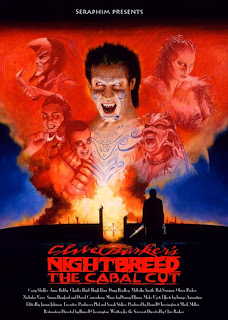 Last weekend I was lucky to be able to attend a viewing of Nightbreed: The Cabal Cut, a new version of Clive Barker's 1990 film Nightbreed ... I'd heard of this before, but knew next to nothing about it ... and the history of the film itself was fascinating.

When Clive made Nightbreed, he wanted to adapt his novella Cabal as a film ... but the studio saw it slightly differently, and felt that the film should be a slasher movie in which David Cronenberg slaughters people ... this was at odds with the film that Clive thought it was ... namely a love story between Boone and Lori, in which the monsters are more human than the humans ...

So once Clive had finished the film, the studio made him go back and source loads more material, and to edit it into the pseudo slasher that was eventually released. Of course it fell between the cracks: fans of slasher pics didn't like it because it wasn't really a picture about a killer ... and fans of the novella were disappointed as it didn't really match that either.

Flash forward some 20 years, and one of Clive's friends is going through his library. He moves some books, and there behind them is a dusty VHS tape which turns out to contain the original footage from Nightbreed. Another of Clive's friends, a filmmaker named Russell Cherrington, decides to see what he can do to clean up the footage, and perhaps to create the film that Clive intended. Luckly Russell had the original scripts to work from, and so, armed with a DVD conversion of the tape, the original film, the original scripts, the music tracks, and some help from actor Doug Bradley to re-dub Lylesberg back to Bradley's voice rather than the Germanic voice the studio gave him on the released film, set about recreating Clive's vision.

Two years later, and the results are amazing. Russell has created a patchwork masterpiece which tells the story as it should have been told. It is two and a half hours long, but doesn't feel it, and all of Clive's characters come singing off the screen. The re-edit tips the balance back, so that it's Boone and Lori's love story which is centre-staged rather than Doctor Decker's killings (they are still present though), and there are more monsters and battles than before. Decker does not survive to the end, as in the studio cut, and the role of the priest is also shifted somewhat. There are many other changes to the pace and structure as the film progresses, and overall it's superbly entertaining and does everything that the novella does. 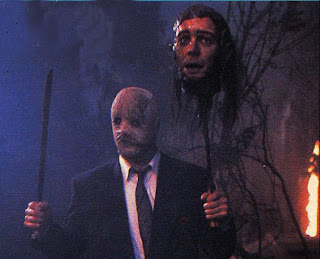 The redubbing of Lylesberg works very well indeed (I assume this was necessary as the VHS footage was not re-dubbed, and there is more of this character in the film than before), and despite the obvious poorer quality of the VHS-recovered footage, you don't really notice as you become caught up in the action and adventure of the story. A couple of the recovered scenes have studio captions on them, which is a shame, but again this can be overlooked given what Russell was working with and trying to achieve. If the actual footage never materialised, I wonder what some of the folks who work on the Doctor Who restorations could do with this. I'm sure that the sound could be improved, and probably the picture quality too given the miracles they have worked with the Who footage.

I would dearly love for this version to be made available, and at the moment there is a petition running at http://www.occupymidian.com/ to try and encourage the studio to find and release the original footage to Clive so that a release-quality cut can be prepared and made available. At the moment the studio doesn't think there's enough interest in the project, but from the packed house I was at, and the reception that the film has had at every screening so far, this would seem to be untrue. There's also a facebook page here: https://www.facebook.com/groups/occupymidian/. So please hop over and add your voice to the petition, and maybe one day we will have the Blu-ray double disk edition of the original film, director's cut and documentary interviews and other added extras which the film deserves.