A couple of audios to talk about this blog. We don't often get the pleasure of being able to listen to CDs, but several long journeys over Christmas meant that we had the opportunity. 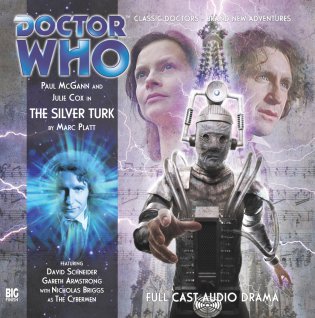 First off is the new Doctor Who CD from Big Finish. This one is called The Silver Turk and is by Marc Platt. Now, I have to give due acknowledgement here and say that Marc is one of my oldest friends, and one of the best writers around ... which meant that I was expecting a lot from this CD, especially as it doubly features the Cybermen, my favourite monster ...

The initial problem I had was that the Doctor (in his 8th Paul McGann guise) had as his companion Mary Shelley ... yes, that Mary Shelley, she of the Rights of Women and Frankenstein. Personally I think this is a step too far. I can see that Big Finish have to keep pushing the boat out and bringing in new companions and ideas, but to have such a famous historical figure grated with me.

The plot involves the Doctor and Mary arriving in Vienna in 1873, and straight into a strange situation with a 'silver Turk' - a game playing machine which actually turns out to be a Cyberman. Now here the next problem surfaced, as Sam asked me why the 'owner' was feeding the Cyberman with soup ... as far as she knew, the thing didn't eat food. But this wasn't explained, as the audio expects the listeners to be au fait with all the various Cyberman designs and versions and to have worked out from the cover that this was an early Cyberman, which was perhaps more man than cyber ... but this then led on to more continuity which listeners were expected to 'get' - advance scout parties from Mondas ... It was all a little confusing.

And then Marc starts to bring in all manner of allusions to Frankenstein, with the Cybermen rebuilding themselves from body parts, to being powered up by an electric storm, and Mary keeps banging on about how they should be pitied and so on ... it was all way too obvious a lead in to where she got her ideas for Frankenstein from.

There's another plot too, where a puppet maker called Drossel (inspired no doubt by The Nutcracker's Drosselmeyer) who makes realistic human automatons and then gives them human eyes - not quite sure why ... nor why there then needs to be a Cyberman as a chess-playing robot, when Drossel could build something to do that anyway ... the puppets all sound clattery too, explained by them wearing wooden clogs ... not sure why that should be though, except that it sounds good on audio.

Overall then, I found it disappointing. The Cyberman were somewhat wasted in the overall scheme of things, and they were also very hard to hear - the electronic distortion on their voices making the words impossible to make out. As with all the Big Finish audios, the production was very good, and the quality of the packaging and art superb. I think what let this down was the basic idea.  Sorry Marc.

The Silver Turk can be obtained from Big Finish here: http://www.bigfinish.com/153-Doctor-Who-The-Silver-Turk 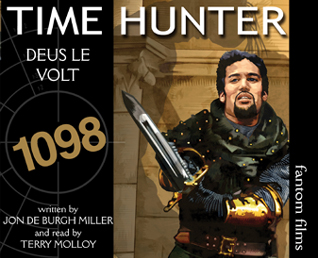 The other audio we listened to was one of Fantom Films' audio readings of the Time Hunter series. Again, my interest here is that Telos published the original novellas, and so I edited and worked with the writers on them. But Fantom are doing a cracking job at recreating them as audio books.

This one was Deus Le Volt by Jon de Burgh Miller, and was read by Terry Molloy.  The plot sees our time travelling heroes Honore and Emily, thrown back to 1098, to the siege of Antioch in the Crusades, where they find the Fendahl from Doctor Who is at large, killing the knights and growing in strength.

Molloy does a brilliant job with the reading. Every character (and there are a lot of them) has a separate and distinct 'voice' and the plot rattles along at a great pace. This was perhaps the closest that the Time Hunter series got to a pure historical - it's not until the last act when all sorts of wierdness starts happening - and it really works as an audio.  I'm looking forward to hearing more of these when we get the chance.

Sorry to go into pedant mode David but Mary Shelley only wrote Frankenstein. The Vindication of the Rights of Women was written by her mother Mary Wollstoncraft.

Hi Steve - of course you are right. I was just getting confused :)