The mid-season Doctor Who two-parter has not fared that well in previous years. The silly Sontaran thing was pretty dire, and the Daleks in New York scenario was disappointing to the extreme. So it's good to see that the tide has been turned, and the recent two-part adventure ('The Hungry Earth'/'Cold Blood') was exciting and well executed. I loved the first episode in particular. The setting up of the problem was nicely handled, and the idea of people being sucked below the ground very well achieved. It was scary and creepy, and I could imagine more than one child nervously asking their Mum or Dad if Amy was OK after she was taken. In a way, the opening was reminiscent of 'The Green Death' with the Welsh accents and setting, and the mining idea, also 'Inferno' with the concept of drilling deep into the earth. But of course it was really 'Doctor Who and the Silurians' which was being riffed on, with the underground reptiles being disturbed by the drilling and deciding to wage war on the humans. The idea of the humans setting up electronic surveillance all over the town in 9 minutes was ludicrous. I didn't see why that shouldn't all have been done in advance - after all, they have set up this massive mining operation there, it could have been a deserted village to start with - or cleared of people - and surveillance set up to keep unwanted intruders away. But then the kid gets taken ... and we meet the alien being. 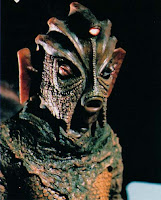 But it's a she (how can a reptile, cold blooded, and egg laying, have mammary glands?) and her alien face is a mask ... and she speaks perfect English! And she doesn't even have a third eye ... how disappointing. The make-up was brilliant though - certainly the best reptile effect I can remember seeing anywhere (puts the new series of V to shame as well). But if these are meant to be Silurians, then you might as well take the defining characteristics - the hooting electronic voice, the third eye - and use them for the re-mix. It's a little like making the Cybermen not be silver or robotic, or having Daleks with legs ... if you're not going to use the essence of the original, then why bother to even say they're the same thing. Seemed rather pointless to me. Anyway, getting over the creature's perfect white teeth, the beings want a war, and so the Doctor has to try and stop them. In a nod to the original, there's of course two factions - one warlike, and one peaceful, and the Doctor has to try and calm things down. Except that idiot woman on the surface kills their hostage and nearly provokes the war until Stephen Moore (he of the Marvin voice) sends all the reptiles back to their cells to be frozen again. It's a shame that they didn't make use of the tonal device from the original story - it could so easily have been the thing that Amy steals to open the bracelets holding her captive ... also on the doors and other elements ... again, if you're going to bring back old monsters, then why not use some of the memorable aspects of them? What was with the venom-tongue? I didn't get that. It seemed to add nothing to the plot - surely Mrs Kumar ('pull my finger!') was always going to want to stay down there and fix everything with a pipe cleaner, a bottle of bleach, and a small aubergine? The father too ... nothing more for him on the surface anyway. He could have had cancer or any human illness for the plot to work ... I suppose the whiplash tongue was a nice CGI effect, and also gave another nod to the original source story - the idea of the reptiles wiping out the humans with an infection. And after the story had played out, some interesting revelations. I was not expecting Rory to die. Not at all. Very nicely done by all concerned. And Karen Gilan deserves a Bafta for her performance as she struggles not to forget him, only to lose at the end. Very well played, and the first time this season that I have been moved to tears. Then the Doctor shoves his hand in the crack and pulls out ... a shattered piece of the TARDIS ... interesting indeed, and very portentious for what is to come. The series is shaping up nicely, though many of the episodes are on the high good side rather than on the spectactular (like 'Blink' or 'Family of Blood'/'Human Nature'). Maybe there are more revelations to come ... and I think with the final episodes concerning the Pandorica, I guess we have more River Song to look forward to as well ...
Posted by David at 12:02 pm

Just a minor quibble, the mid season two parters in the past were actually the likes of empty child/human nature & silence in the library, all of which were top notch. The poorer two parters that you referred to were all the 1st 2 parters of each series, but as I said 'minor' quibble! I agree with almost every point in your review & I also, was very surprised by Rory's demise. I was expecting the Doctor to bring him back to life! Why does the Doctor still remember him though? Or have i missed something obvious? I have high hopes that this season's best is yet to come & with almost certainly at least 3 out of the final 4 episodes being Steven Moffat stories, it is very likely that it is just around the corner!