Doctor Who: Silence in the Library 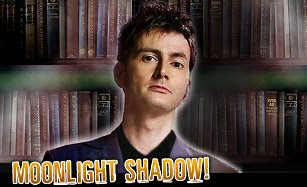 That's more like it! Steven Moffat to the rescue with another of his complex tales of horror and relationships. It's interesting is that almost every commentator is saying the same thing: that Moffat's stories are the best, and it's not hard to see why. With 'The Empty Child'/'The Doctor Dances' (WW2 horrors, gasmasked children and zombies, and, of course, 'Are you my mummy?'), 'The Girl in the Fireplace' (creepy clockwork men from a spaceship in the future stalking 18th Century France, and white horses jumping out of mirrors) and 'Blink' (statues that will come and get you if you look away or so much as blink) Moffat has made the art of great television his own, drawing on various primal fears and delivering scripts which make you think as well as adding a laugh or two alongside some well judged shocks and scares. What is strange is that although almost everyone who offers an opinion would claim that Doctor Who is at its best when it's being scary, Russell T Davies seems to believe the opposite and likes to present more lighthearted runarounds.

I suppose on the plus side, this lighter, fluffier fare shows just how brilliant the darker tales are - consider whether 'The Girl in the Fireplace' would have stood out quite so much had it been bracketed between 'Human Nature'/'The Family of Blood' and 'Blink' rather than between 'School Reunion' and 'Rise of the Cybermen', but it does seem that this preference towards comedic runarounds is at odds with what everyone, critics and viewers alike, actually want. And when your entire audience is waiting for Steven Moffat's story, and that everything before it is just some sort of prelude, well the balance can't be right can it?

Just as with his earlier tales, there was little really known in advance about 'Silence in the Library', except maybe that it featured a library ... so when we open with a little girl seeing said library in her imagination, floating about within it like Christopher Walken in a hotel lobby, we are immediately on guard ... what has this to do with anything? In fact, this feeling persisis throughout the episode as the little girl, her father and the mysterious Dr Moon discuss the girl's imaginary library, though this is where the Doctor and Donna arrive, and where the girl seems to communicate through a security camera. There are no answers forthcoming, except that Moon seems to be more deeply involved in whatever it is than initially suspected.

The structure of the opening is interesting as well ... starting pre-credits with everything from the Girl's point of view and then, post-credits, backtracking a little in time to show the Doctor and Donna's arrival. I wasn't sure this worked at first, but on re-watching, it seems to be a good shorthand to get everyone in place.

The Library, it seems, is the biggest in the universe ... it occupies an entire planet. The core hollowed out to house the index computer, and newly printed copies of every book ever in shelves and buildings on the surface. My first niggle came when the Doctor and Donna wondered why the place was deserted. According to the computer, there were just two humanoids on the planet (being the Doctor and Donna) but when the Doctor looking for any lifeforms, there were over 1,000,000,000,000 reported. This seemed to puzzle the Doctor but, I wondered, why? If you take microbes and bacteria as being life forms (and they are) then you would get the same reading on Earth - and you can't hear or see microbes and bacteria. I found this so obvious myself, that I didn't understand why the Doctor made a big thing of it.

We're introduced to the Nodes (which become important later). These are information points dotted around the Library with human faces. Shades of the Neil Gaiman/Dave McKean film Mirrormask I thought. The first one had an annoying nasal voice but I like the straight reporting of the log entry, complete with 'Argh!' This leavening with humour is important as it helps to maintain some sense of light when things get dark. They are also given a warning: stay out of the shadows ...

There is some lovely lighting in this story. Sometimes on television, all the director seems to want to do is to light their sets blanket-style. Blasting every nook and cranny with light ... but here the lighting is important as the play of light and shadow is integral to the plot, so great care has been taken and it shows. I loved the interiors, dark and light and musty and filled with menace. Very nicely done indeed.

The plot kicks up a gear when the Library is invaded by a group of space suited archaeologists. There is River Song (the leader), Strackman Lux (the financier), Proper Dave (the pilot), Other Dave and Anita (roles uncertain) and Miss Evangelista (Lux's PA). These people have come to investigate the Library and to find out why it closed 100 years earlier and where all the people there at the time had gone. Lux is set on keeping the secrets there intact (like, for example, who or what CAL is - referenced on the computer systems), his PA is nice but dim, and the others are all nicely characterised with what little screen time they each get.

It all gets a little confused now as there's so many people all of a sudden, but the Doctor has realised that they are under attack from something called Vashta Nerada, literally, 'the shadows that melt the flesh'. These are minute voracious flesh eaters which swarm and attack and target other creatures, and which can strip them to the bone in a microsecond.

Moffat has really latched onto it this time ... fear of the dark and shadows, and why we should really be afraid of these things ... and it's brilliant stuff. As the teleplay unfolds, Miss Evangelista is the first to be killed, and the aftermath of her death is poignant indeed. The idea of her data ghost persisting in the neural communicator is brilliant and horrific and very, very well handled by all involved. Her final, looping, words of 'Ice Cream' being horrifically memorable.

Next to go is Proper Dave who inherits a second shadow before he too is consumed in a microsecond, leaving behind a space-suit inhabited by his grinning skeleton, and then motivated by the Vashta Nerada to chase after everyone else.

Meanwhile the Doctor has determined that the only defence against the creatures is to run and so he whizzes Donna off to the TARDIS via a handy teleport, but the process seems to fail. 'Donna has been saved' intones the little girl ominously. Lo and behold Donna's face turns up on one of the information nodes when the Doctor tries to find her location having realised that she did not make it to the TARDIS. But this surely means she is dead?

River Song (what a daft name) is something of an enigma. She knows the Doctor well (very well) in the future but he hasn't met her yet. So who is she? Is she his wife? A future companion? Professor Bernice Summerfield - also an archaeologist - masquerading under a different name? Hopefully some answers will be forthcoming next week. The implication is that she is something like this anyway.

So we leave the episode with everyone in the Library. The lights are going out, Donna is apparently dead, and there's an ambulatory skeleton made of flesh-eating microbes in a space suit asking who turned the lights out ... what a brilliant climax!

I loved this episode. It all felt right. It was well paced, not too much running about and light on flippant humour (though Donna got on my nerves a little as she is want to do most episodes). The horror was well handled, and the ideas simply burst from the script in great waves of brilliance.

I cannot wait until next week to see how it all, hopefully, resolves. According to the 'Next Time' trailer, we have the planet cracking open like an egg, trying to save CAL (whatever that might be) and spoilers!

an enthralling episode with so much to look forward to next week.. it's just like being a child again, waiting for 'next saturday' after an excellent cliffhanger!So many questions to be answered.. who or what is cal, the girl & Dr Moon, and of course.. River Song? Although, I think the latter will end up being 'Rose', how or why? i dont know but the arc in this series seems to be pointing in that direction.. we shall see!

I agree with you again, David. A well paced, intelligent and scary piece of dark sci-fi.Great acting, zippy but unflashy direction by Euros Lynn & a script that had the courage to slow down to allow the characters to shine through.

My wife & I spent an hour on Sunday coming up with anagrams of River Song. It might be relevant or not ... but with RTD's influence you never know.

If I could be allowed one minor quibble : couldn't they have gave an actor with the ability of Steve Pemberton a bigger role?

Wasn't it great to get a proper cliff-hanger ending for a change? All hail "The Moff"!