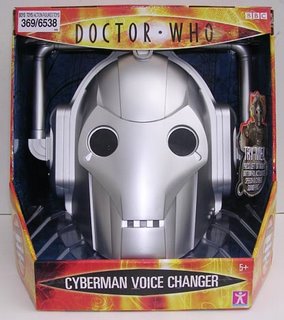 Among the many toys and games appearing as a result of the popularity of the new series of Doctor Who is something called a Cyberman Voice Changer Helmet from Character Options. Now, as I have long been a massive fan of the silver giants from Mondas, I was looking forward immensely to getting this item. The cybermen were immensely popular in the second season, appearing in both the mid-season two-parter Age of Steel/Rise of the Cybermen, and the season end two-parter Army of Ghosts/Doomsday. No surprise then that they have their own range of merchandise now. I finally found out the codes for Argos a week or so before it was officially released ... but they didn't work. And even though the assistant in Argos was helpful and actually went to scour the shelves, none could be found. So it wasn't until the new Argos catalogue came out that I was finally able to get my mitts on the item. It is a work of art. Some toys are not meant to be played with. Some cry out for it. This item actually has both effects on me. I don't want to touch it as it is such a beautifully designed and made item, but you also cannot help but want to put it on and be a Cyberman. 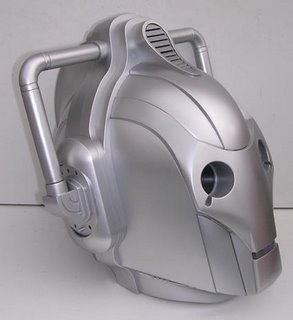 The helmet is packaged in a large box, leaving the face free. Be careful when selecting one though as the face is unprotected and so could get scratched or marked in the shop. However on this toy, the packaging is simple to remove to get at the helmet. The band of cardboard across the top (which has the Doctor Who logo on) can have it's four retaining strips of cellotape sliced, then that comes off, and the helmet can simply be slid out of the box - no retaining metal ties here. The finish on the helmet is beautiful. It is smooth and sleek and really looks like metal. There is nothing about this that looks cheap. It is a superb replica of the helmet from the actual prop and is roughly the same size as well, making it an excellent display item as well as a great toy. There are three buttons on the side, and a sliding button hidden inside. The slider can switch from 'try me' mode to the voice changing mode, and there are three settings of voice changing. I'm not totally sure what the difference is between them to be honest. I think it's the pitch of the modulation or something. 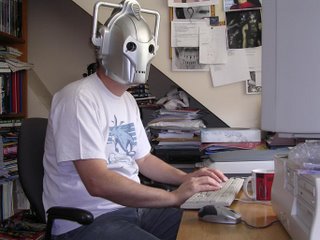 One of the buttons on the outside makes the helmet emit the electro Cyber-death grip crackle, so you can attack your enemies. Another makes the helmet speak one of loads of pre-set phrases. And the middle button activates the voice change function, so that as you speak, so the mouth flashes blue and your voice is Cybernised. Brilliant stuff. If there is a downside, it's that the voice of the wearer can be heard as well as the converted voice, but that's a minor gripe for what is one of the most beautiful objects yet released under the Doctor Who banner. 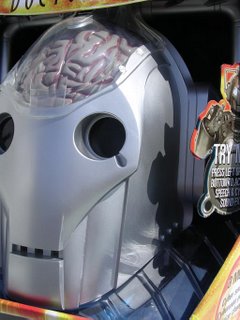 As if this wasn't superb enough, there is a CyberController variant of the helmet coming soon from Toys R Us. This has the same voice chip, but different packaging, and of course has the exposed brain of the CyberController too. Like the standard one, this is beautifully made and presented and really demands to be displayed so that everyone can appreciate it. The Helmet costs £30 rrp, and for what you get this is an amzing price. Not only does it look so good, but it makes you sound like a Cyberman ... and the blue flashing mouth is the bees knees. I had a quick look online and the only other voice changer helmet around seems to be the Darth Vader one which ranges from about £30 to £45 depending on where you look. But Star Wars ... pfthh ... Cybermen is where it's at and this toy deserves to be up there with the greats.
Posted by David at 3:03 pm

Ha Ha! Beautiful. Love the picture David. Be careful not to press Delete...